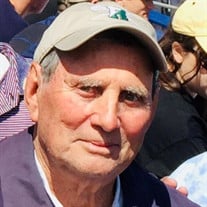 Albert Thomas Bianchi, 85, passed away on Monday, June 28, 2021 in Saline, Michigan with family at his side. Al was born on September 24, 1935 in New York City to the late Charles Bianchi and Sheila (Julia Sugrue) Bianchi. On August 30, 1958, he married Suzanne Gallagher and raised their four boys in Maplewood, NJ. They made many life-long friends in that community. Later in his life, Al lived in Bernards Township where he served on the Golf Advisory Committee and was well loved in the community. He is survived by his sister, Sister Sheila Bianchi; sons Jim & Richard; daughters-in-law Martha (Gibbon) Bianchi, Rita Barrie (Flannigan) Bianchi, and Carol (Manuele) Bianchi; niece Michelle (Noodleman) Smyth and nephew Jimmy Gallagher; grandchildren, Albert Thomas II, Katie, Bob, Kevin, Christopher, Julia, Rita, Nolan, Michael and Caroline; and great granddaughter Paige. He was preceded in death by his wife and sons Lieutenant Robert Bianchi, USN and Commander Kevin Bianchi, USN, and infant brother Charles. Al earned an Electrical Engineering degree from City College of New York and an MBA from Rutgers University. He worked for Westinghouse Electric Corporation and ITT as an engineer and manager. He served his Maplewood community as a scout leader, founder of the youth football program, and later on the Warren Township Wagner Arboretum Board where he continued his love of gardening. Al was a great cook and loved attending the many sporting events, competitions, and recitals of his children and grandchildren. Al was devoted to his family and loved watching his children and grandchildren play sports at Columbia, Ridge, and Saline High Schools as well as the U.S. Naval Academy and Rutgers University. He will be buried with his wife and sons at a later date in New Jersey. Memorial contributions may be made to the Alzheimer’s Association or the Bianchi Memorial Fund (which supports military families who lost a parent serving in the military) bianchimemorialfund.org. To sign Al's guestbook, to leave a memory you have of him or for more information please visit www.rbfhsaline.com

Albert Thomas Bianchi, 85, passed away on Monday, June 28, 2021 in Saline, Michigan with family at his side. Al was born on September 24, 1935 in New York City to the late Charles Bianchi and Sheila (Julia Sugrue) Bianchi. On August 30, 1958,... View Obituary & Service Information

The family of Albert T. Bianchi created this Life Tributes page to make it easy to share your memories.

Send flowers to the Bianchi family.