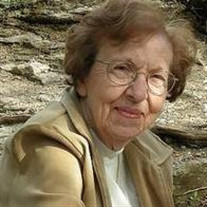 Anita Louise Fielder (née Dowler) died April 28th, 2018 at the age of 98 in Alpena, MI. Anita was born September 19, 1919 in Seymour, Illinois, daughter of Emery R. Dowler and Ethel Dowler, née Burroughs. She married Gordon Wesley Fielder, Jr. (d. 1976) July 26, 1952. Anita Fielder received a B.A. in Home Economics from Eastern Illinois University, and an M.A. and Specialist’s degree in the same field from The University of Illinois, Urbana. After several years of teaching at high schools and colleges, and a stint as a professional services volunteer during WWII, she served as a professor in the Department of Home Economics at Eastern Michigan University, rising to Department chair. She led the Department during a period of growth that saw the Department expand rapidly to become the College of Human Services, which included the allied professions of dietetics, child development, social work, and nursing. She retired in 1980 after 39 years of teaching and administration. She found her long career as an educator to be fulfilling and rewarding, as she placed a high importance on education as a personal value. After retirement, Anita lived in Urbana, Illinois and Alpena Michigan. She had a second career as a tour guide and author of a tourism planning book. She was also an active community volunteer. She was devoted to her grandchildren and enjoyed the company of beloved pets. Anita is survived by her children, Gordon W. Fielder, III (Frances), Katya Thomas, and David G. Fielder (Marie). Grandchildren include Gordon’s children, John and Ellen Fielder, Katya’s children, Hannah and Beauchamp Thomas, Katya’s step-children, Adam Thomas and Kate Smith, David’s children, Erin Fielder-Attia (Wafik) (and their daughter Julia), Kelly and Sarah Fielder, and David’s step-children, Ben Wilson and Grace Putinsev (Mikhail). She was preceded in death by her husband, four brothers and sisters and her parents. Visitation will be held at McWilliams Funeral Home from 2:00 P.M. to 5:00 P.M., with a brief service at 5:00 P.M. on Tuesday, May 1st, 2018 and then a second service at Robison-Bahnmiller Funeral Home in Saline, Michigan from 2:00 P.M. to 5:00 P.M., with a service at 5:00 P.M. on Thursday, May 3rd, 2018. Interment at Oakwood Cemetery in Saline, and a reception to follow. In lieu of flowers, family and friends are urged to donate to the Anita and Gordon Fielder Endowment Scholarship Fund at Eastern Michigan University, Office of Financial Aid, 403 Pierce Hall, Ypsilanti, MI 48197 and envelopes will be available at the funeral home.

The family of Anita Louise Fielder created this Life Tributes page to make it easy to share your memories.

Send flowers to the Fielder family.