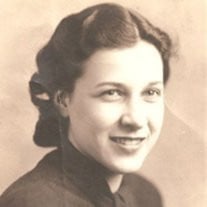 Age 96, died on January 1, 2014 from heart failure after a short stay in St. Joseph Hospital’s Hospice Unit 3 weeks shy of her 97th birthday. With the help of a mid-wife, Ann was born on a farm in Clio, Michigan on January 20, 1917, the daughter of Mary Waymouth Peters, a Canadian and Alfred Edward Peters, a local carpenter. They preceded her in death as did her younger brother Charles. In 1937 she married Gerald Coe who preceded her in death on October 30, 1995. They met at the Ypsilanti State Hospital where she worked as a medical secretary and he a barber. She said in her 2008 biography that Gerald was the love of her life. On their first date they saw, Mr. Smith Goes to Washington. Gerald was a dapper fellow and practiced his trade as a barber in Saline for more than thirty years; actually he was an aspiring film maker. Following their marriage they lived in Saline where they were lifelong members of the First Methodist Church. In her youth, Ann overcame a thrice broken arm to become an excellent pianist. In the Saline community she led a Girl Scout Troop, liked to bowl and was involved with several women’s groups. She once proclaimed with a smile, “I was the brightest girl in my class [valedictorian] and the best looking. She re-entered the job market late in life and before retirement was the secretary to the CEO of the Saline Community Hospital. In retirement, she and Gerald lived fifteen winters in Arizona, visited fifty states, and travelled through Alaska in a motor home and through Canada’s provinces. They visited Australia, New Zealand, Thailand, Switzerland and other places as part of a square dance troupe. She loved bridge and played to win in every board game ever invented. The artifacts of her life reflect a person of broad interest: bird watching, coin and stamp collecting, and small antiques research. She had her hair done weekly, dressed with elegance even while in a nursing home, and she continued as a crossword master, read from the best seller list, sent emails, participated in every activity, and even had a facebook page. She outlived many of her friends yet sent more than fifty Christmas cards this season. She was stoic, had high expectations, and maintained a sense of humor. She was of consummate curiosity, of good heart and spirit. Daughter Janis from West Bountiful, Utah and son Alan from Saline were with Ann at the time of her passing. The Monday before Christmas she gathered with her son and daughter along with her grandson and his wife, Gerald and Michelle, of Novi and her great grandchildren Madeline age 10 and Alexander age 6. A few of her cousins survived her in Ontario and Saskatchewan, Canada. Cremation has taken place. A memorial service will be held in the spring, with time and date to be announced. Contributions to her memory may be made to the First United Methodist Church of Saline, 1200 North Ann Arbor Street, Saline, MI 48176. Arrangements entrusted to the Robison-Bahnmiller Funeral Home of Saline. To sign Ann’s guestbook, to leave a memory or for more information please visit www.rbfhsaline.com.

The family of Ann E. Coe created this Life Tributes page to make it easy to share your memories.

Send flowers to the Coe family.