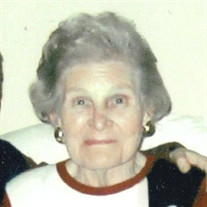 Pagani, Anna Mae Saline, MI Formerly of Perrysville, PA Age 89, passed away peacefully on Saturday, December 6, 2014 at the Linden Square Assisted Living Facility in Saline, MI. Anna Mae was born in Pittsburgh, PA, on July 23, 1925 as one of seven children to the late John and Sophia (Haeban) Novak. Anna Mae was a graduate of Allegheny High School class of 1943. She, her husband Edward W. Pagani and son moved to Perrysville, PA in 1956. She was a devout Roman Catholic who attended daily mass at St. Teresa of Avila Parish and when she was not cooking at Carmassi’s Italian restaurant, bowling, or attending bingos she was a volunteer at Allegheny General Hospital for over 20 years. After her husband’s death in 1994, Anna Mae remained in Perrysville until 2004 when she relocated to Ann Arbor, MI to be near her son and his family. She was a resident of Brecon Village Assisted Living and Linden Square Assisted Living where she enjoyed attending mass, bible study, sing-alongs and participating in arts and craft activities. The family is extremely grateful to the caregivers and staff at Brecon Village, and especially to those at Linden Square and Arbor Hospice for the extraordinary care and love Anna Mae received during the last few years of her life. Anna Mae touched the lives of many people wherever she lived. Anna Mae will forever be remembered by her son Dr. Edward D. Pagani and daughter-in-law Karen Pagani, treasured grandchildren Kaitlin Stewart (Atlanta, GA), Zachary and Chase Pagani, and beloved brother Edward Novak, along with many nieces and nephews. She was preceded in death by her beloved husband of 46 years Edward W. Pagani, and by her three brothers Stephen C. Novak, Sr., Jacub Novak and Joseph Novak and her two sisters Mary Novak Pavlis and Margaret Novak Snyder. Visitation hours for family and friends will be held at Devlin Funeral Home, 806 Perry Highway, Pittsburgh, PA 15237 on Friday, December 12, 2014 from 8:30 AM to 9:30 AM, followed by a Funeral Mass at 10:00 AM at the St. Teresa of Avila Parish, 1000 Avila Ct, Pittsburgh, PA 15237. Burial services at St. Joseph Cemetery will immediately follow the Funeral Mass. In lieu of flowers, donations may be made to the University of Michigan Alzheimer’s Disease Center through its webpage at https://leadersandbest.umich.edu/find/#/med/med/madc. To leave a memory, to sign her guestbook, or for more information or directions please visit www.rbfhsaline.com.

The family of Anna Mae Pagani created this Life Tributes page to make it easy to share your memories.

Send flowers to the Pagani family.