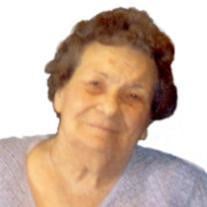 Age 81, passed away on Thursday, January 12, 2012, at the Saline Evangelical Home. She was born on February 2, 1930, in Milan, MI, the daughter of Frederick and Lena (Wineland) Winkle. On July 17, 1948 in Milan, MI, she married Lynn Reese, and he preceded her in death on July 14, 1991. During her lifetime Anna worked in the Saline public school systems in the food services department for over 23 years until her retirement. Survivors include daughters Deana Ann Ellison of Saline, and Diane (Robert) Riley of Chelsea, MI, sons David (Barbara) Reese of Maumelle, AR, and Donald (Judy) Reese of Lafayette, CO, and one sister Lavon Beeman of Chelsea, MI. Other survivors include eight grandchildren, ten great-grandchildren, and several nieces and nephews. Anna was preceded in death in addition to her husband by two brothers and two sisters. Funeral services will be held on Tuesday, January 17, 2012, at 11:00 A.M. at the Robison-Bahnmiller Funeral Home of Saline, with Rev. Laura Speiran and Rev. Lance Ness officiating. Burial will follow the service at the Macon Twp. Cemetery. Contributions may be made to Arbor Hospice or to the First United Methodist Church of Saline. Envelopes will be available at the funeral home where friends may begin calling on Monday, January 16, 2012, between the hours of 4:00 P.M. and 8:00 P.M. and on Tuesday, January 17, 2012, from 10:00 A.M. until the time of service at 11:00 A.M. To sign Anna’s guestbook or to leave a memory visit http://obits.mlive.com/obituaries/annarbor/ or for more information or directions please visit www.rbfhsaline.com.

The family of Anna E. Reese created this Life Tributes page to make it easy to share your memories.

Send flowers to the Reese family.