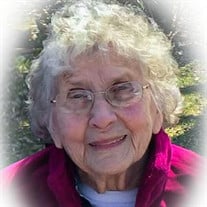 Arlene Janet Fardig, 91, passed away peacefully surrounded by her family on Sunday, November 7, 2021. She is survived by her daughter Jude Fardig (Chris Wallace), son David Fardig, daughter-in-law MaryAnn Fardig, her grandchildren Lauren Fardig-Diop (Mulay), Amy Khavajian (Mani), Danny Fardig (Randi), Ben Wallace, Hannah Wallace, and her 7 great-grandchildren: Mulay and Salimata Diop, Leila, Della and Zoe Khavajian, and Bode & Max Fardig. She was preceded in death by her husband, Donald Ormand Fardig, son Don “Digger” Fardig, parents Elma Ellen (Visti) Pohto and John Oliver Pohto, and brother Arnold Pohto (Dorothy). The daughter of Finnish immigrants, Arlene was born in Painesville, Ohio. Her family moved to Highland Park, Michigan when she was 7 years old due to her father’s job sailing the Great Lakes; they moved frequently to follow his work. She met her future husband Donald at Central High School in Detroit; they were married after graduation and shortly afterward, he enlisted in the US Army and went overseas to serve in Germany. They settled in Taylor, Michigan on the same street as Don's sister Amy Lytikainen, mother Fannie Fardig and brother Raymond Fardig. Arlene took great joy in caring for her husband and children. Once Donny, Jude and David were school-age, Arlene re-entered the workforce in the teletype department of General Motors, and later as a secretary for Hormel. In 1974, they moved to Ann Arbor, while Donny was playing hockey at the University of Michigan, and never missed a U of M home football game while Jude marched in the band at halftime. She was incredibly proud that all three of her children received their undergraduate degrees from the University of Michigan, and pursued careers in fields that brought them joy. Arlene worked as an administrative assistant to the Dean of the School of Dental Public Health until she retired at the age of 58. Arlene and Don enjoyed their retirement on Torch Lake and were active in their church, Calvary Lutheran in Elk Rapids. She had a beautiful rose garden at their home and helped Don take care of the Torch Lake Day Park. They were also sextons at a local cemetery. She and Don had a strong community of friends up north, and in Sarasota, Florida, where they had a winter home. She enjoyed traditional Finnish cuisine and was a master in the kitchen. She loved making cookies & meals for her family and friends to enjoy, especially pasties, for which she was famous. She also hosted annual Thanksgiving feasts for players on the Michigan hockey team who didn’t have family in the area. Even though her Lewy body dementia was advanced, she understood that Don, her husband of 70 years, had passed away on October 6th, 2021. Arlene could not be without the love of her life for longer than 32 days. The family will hold memorial services in the future. In lieu of flowers, memorial donations may be made to: Arbor Hospice - 2366 Oak Valley Drive Ann Arbor, MI 48103 and/or The Alzheimer's Association.

The family of Arlene Janet Fardig created this Life Tributes page to make it easy to share your memories.

Send flowers to the Fardig family.