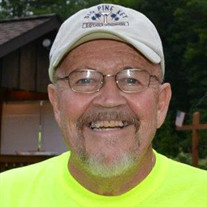 Arthur John Weid, 79, of Manchester, Michigan, passed away peacefully at home on Monday, December 9, 2019 after courageously battling an extended illness. Art was born on February 8, 1940 in Ann Arbor, Michigan to the late Walter J. Weid and Janetta Parker Weid. He is survived by siblings Janetta (Don) Johnson and Walter (Trudy) Weid. In 1957, Art married his high school sweetheart, Myrna Brown, and had three daughters, Lori Weid, Deborah Weid, and Rebecca (David) Brown. In 1968, he married Carol Poore and had son Jeffrey (Sue) Marlotty, daughter Danaelle (William) Crisp, and son Matthew Weid. Son Matthew preceded him in death in 1989. In 1980, he married Karen Weid at a chapel in Fort Lauderdale by the Sea, and she survives him. He is also survived by son Scott (Terri) Petersen. Daughter Diane Petersen preceded him in death in 2011. Art leaves behind 10 grandchildren, and 11 great-grandchildren who were his biggest fans, along with countless friends and family members who dearly loved him. Art attended Ann Arbor High and graduated in 1958. He played on the football team and made long-lasting friends. He was very proud of never fumbling the ball once, and for winning the conference championship in 1958. He had a beautiful singing voice and sang in the Acapella choir for the Pioneers during high school. Art worked as a printer, and those in the business often described him as “one of the best color printer guys around.” Art was an avid UM football fan and an overall sports enthusiast. In fact, he worked at the football games for over 50 years. Art also enjoyed bird watching, cooking, music and singing, golfing, and traveling to the Florida Keys each winter for over 30 years. Art passed on his love of nature to both his kids and grandkids. We will think of him every time we see a beautiful sunset, a bright moon, a hawk in flight, or a deer in the woods. His greatest legacy is his loving family, who will forever hold him in their hearts. The family will receive friends on Wednesday, December 18, 2019 from 4:00 PM to 8:00 PM at Robison-Bahnmiller Funeral Home in Saline, MI for a celebration of Art’s life. There will be a special memorial service at 7:00 PM with speakers, music, and a bagpiper to celebrate Art’s Scottish heritage. We look forward to sharing stories and memories together. Memorial contributions may be made to the family c/o Deborah Weid. Envelopes will be available at the funeral home. Cremation has taken place. To sign Art’s guestbook, leave a memory, for directions, or for more information, please visit www.rbfhsaline.com.

Arthur John Weid, 79, of Manchester, Michigan, passed away peacefully at home on Monday, December 9, 2019 after courageously battling an extended illness. Art was born on February 8, 1940 in Ann Arbor, Michigan to the late Walter J. Weid and... View Obituary & Service Information

The family of Arthur John Weid created this Life Tributes page to make it easy to share your memories.

Send flowers to the Weid family.