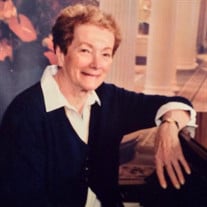 Barbara Schaefer passed away peacefully on September 25, 2018 in Ann Arbor, Michigan surrounded by family and loved ones. Barbara was born on January 23, 1931 in Bronx, New York, to Moe and Lillian Kalisch. In 1945 her family relocated to Miami Beach, Fl where she met Leonard Schaefer, her husband of 63 years. Barbara and Leonard raised their family of five children in North Miami Beach, Fl. After the birth of her last child at the age of 39, she decided to pursue her true passion in the medical field by going back to school for nursing. She received a BSN from Barry University and a MSN from the University of Miami. Barbara began her nursing career at Cedars Medical Center in Miami, Fl quickly rising to head nurse of the OB/GYN and Oncology floors. Barbara’s dedication and passion to patient care became evident in her work and resulted in her placement in several management roles. Barbara rose to the position of Administrator of Nursing for Golden Glades Hospital where she continued her commitment to patient care. Upon retiring Barbara and Leonard moved to Black Mountain, NC where she began a new stage in her life involving relaxation and new friends. Being the energetic, giving individual she was known for, she quickly became bored with a life of relaxation. Barbara again went back to what she knew best, which was nursing. She began teaching at Asheville-Buncombe Technical Community College instilling her values and passion for patient care to her young aspiring nursing students. Barbara remained teaching until the young age of 85. She continued her charitable work by joining the Kiwanis organization working in their store two days a week. Barbara loved socializing and enjoyed cooking and baking for her neighbors and friends. She always expressed how blessed she was for the family she had and all the wonderful friends in her life. Barbara is survived by her four children, Stephanie, Keith (Noemi), Merek (Shawn), Mathew (Debbie) and seven grandchildren, “who she couldn’t brag enough about,” Brittany, Allison, Brendan, Aaron, Ryan, Robert and Jonah. To sign Barbara’s guestbook, to leave a memory, or for more information or directions please visit www.rbfhsaline.com.

Barbara Schaefer passed away peacefully on September 25, 2018 in Ann Arbor, Michigan surrounded by family and loved ones. Barbara was born on January 23, 1931 in Bronx, New York, to Moe and Lillian Kalisch. In 1945 her family relocated to... View Obituary & Service Information

The family of Barbara Ann Schaefer created this Life Tributes page to make it easy to share your memories.

Send flowers to the Schaefer family.