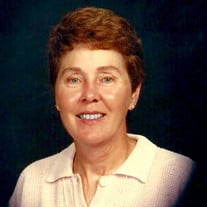 To those whom I loved & Those who loved me: “When I am gone, release me, let me go. I have so many things to see and do, You mustn't tie yourself to me with too many tears, But be thankful we had so many good years.” Betty Ruth Charles passed away Monday, March 8th, 2021 at Ann Arbor’s St. Joseph Mercy Hospital. Betty was 93 years old living in Saline, Michigan at Brecon Village. She was born the 2nd of February, 1928 in Holland, Michigan the daughter of Sarah and John Frier. Her brother was Donald Frier. Betty grew up as a child in Napoleon, Michigan. She graduated from Napoleon High School in 1945 Betty met Spencer Bliss Charles from Napoleon at the Napoleon Methodist Church after World War II. Spencer was in a Military Police division serving in North Africa and Italy. They married October 20th, 1946. They lived together in Saline, Michigan most of their lives. They were members of the Saline First United Methodist Church. Betty is survived by her three children, Julia Louise Waits, Robert Bliss Charles, and John Spencer Charles. Betty is also survived by her three grandchildren, Ian and Kristan Charles in Texas, Seth Waits in Alabama, and five great-grandchildren, Easton, Waylon and London Charles in Texas, and Grayson and new baby Iris Bristow also in Texas. After Betty's children left the house for school, jobs, or Alaska, Betty found a new challenging job as office manager for the new Saline Evangelical Home. Betty rolled that opportunity into a twenty year career. The couple sang, danced, and enjoyed the Saline community. She was an excellent bowler. She also enjoyed playing domino’s and cards regularly with her long time good friends. As my dad would say- "She’s quite a gal.” Betty and Bliss traveled all over the State of Michigan and a great deal of the United States, eventually traveling to Europe and Asia between all that working and living. The couple visited Egypt, France, China, England, etc. and always brought back presents and pictures of their adventures to share. There will not be a ceremony at this time due to the pandemic. Burial will take place at the Napoleon Cemetery at a later date. The family asks that you visit the funeral home’s webpage at www.rbfhsaline.com to sign Betty's guestbook, to leave a memory you have of her, or to post a favorite picture. Thank you. The Charles Family.

To those whom I loved & Those who loved me: &#8220;When I am gone, release me, let me go. I have so many things to see and do, You mustn't tie yourself to me with too many tears, But be thankful we had so many good years.&#8221; Betty... View Obituary & Service Information

The family of Betty Ruth Charles created this Life Tributes page to make it easy to share your memories.

To those whom I loved &amp; Those who loved me: