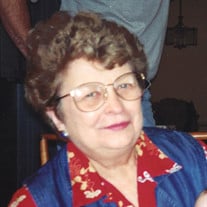 Age 86, a long-time resident of Ann Arbor, died Thursday the 26th of February, 2015 at the Saline Evangelical Home in Saline, Michigan. She was born in Battle Creek, Michigan on May 16, 1928. Beverly's parents were Cecil and Genevieve (Klenk) Wilcox of Battle Creek. She graduated from Battle Creek Lakeview High School in 1946 and from Western Michigan University in 1950 where she received a bachelor's degree in teaching. Beverly taught Latin, French, and English in Hastings, Dexter, and at Tappan Junior High in Ann Arbor. Beverly was active in the First United Methodist Church of Ann Arbor for 60 years. She was particularly active with and served as past president twice of the United Methodist Women group and their support of various missions. She was active in and a past president of the Margaret Waterman Alumnae Group of the University of Michigan. She was a member and past president of P.E.O. chapter CH which supports scholarships for women. She was a member of the UM Faculty Wives Club and the Ann Arbor City Club. Beverly enjoyed being a docent at the University of Michigan museum of art during the 1990s. She had a deep appreciation of art. For many years she attended UM football and basketball games as well as concerts and theatre events sponsored by the University Musical Society. She enjoyed vacationing in northern Michigan and traveling abroad. Beverly is survived by children David Giles Bole and Elizabeth Ann Ford (Ronald) both of Ann Arbor Michigan. She is also survived by three grandchildren Daniel Bole, Emma Ford, and Seth Ford, a brother Robert Wilcox of Leland Michigan, sister-in-law Bonnie Bole of Battle Creek, Michigan, four nieces and two nephews. She will be missed by family and friends. Cremation has taken place. A Memorial Service celebrating Beverly’s life will be held at the First United Methodist Church of Ann Arbor located at 120 S. State St., Ann Arbor, MI, 48104 on Saturday, March 28, 2015 at 12:00 P.M. Memorial contributions may be made to the Margaret Waterman endowment fund. Checks should be made payable to "The University of Michigan Fund #72392" and marked "Waterman Endowment Fund" and mailed to Treasurer, Waterman Alumnae Group, P.O. Box 8142, Ann Arbor, MI 48107-8142. Envelopes will be available at the church where friends may begin calling on Saturday, March 28, 2015 from 11:00 A.M. until the time of service at 12:00 P.M. Arrangements entrusted to the Robison-Bahnmiller Funeral Home of Saline. To sign Beverly's guestbook, to leave a memory, or for more information or directions please visit www.rbfhsaline.com.

Age 86, a long-time resident of Ann Arbor, died Thursday the 26th of February, 2015 at the Saline Evangelical Home in Saline, Michigan. She was born in Battle Creek, Michigan on May 16, 1928. Beverly's parents were Cecil and Genevieve (Klenk)... View Obituary & Service Information

The family of Beverly J. Bole created this Life Tributes page to make it easy to share your memories.

Age 86, a long-time resident of Ann Arbor, died Thursday the...

Send flowers to the Bole family.