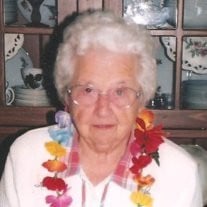 Age 97, passed away on Thursday, October 10, 2013 at the Saline Evangelical Home with her family by her side. She was born on August 27, 1916 in Belleville, MI., the daughter of Clyde and Mary (Robb) Lohr. On August 4, 1937 in Belleville, MI she married Donald D. Briggs and he preceded her in death on January 6, 1998. Survivors include her sons, Bill (Phyllis) Briggs of Elk Rapids, MI and Jack (Sharon) Briggs of Manchester, MI, Grandchildren Jill Briggs of Kaneohe, HI, Karen (Tom) Paradis of Elk Rapids, MI, Scott (Debra) Briggs of Kewadin, MI, Cheryl (Andy) Meske of Ann Arbor, MI, Janet (Joe) Rickle of Stockbridge, MI David (Kristi) Briggs of Richland, MI, Lynne (Steve) Allen of Manchester, MI, Rob (Natalie) Spires of Deerfield, MI and Rebecca Trefry of Manchester, MI, Fifteen great-grandchildren, Sister-in-law, Mary Lohr and Eva (Briggs) Rushlow and also many nieces, nephews and cousins. She was preceded in death by her sister, Gertrude Beauregard, brothers, Herbert Lohr, her twin brother, Clyde Lohr and Donald Lohr. Funeral Services will be held on Sunday, October 13, 2013 at 3:30 P.M. at the Robison-Bahnmiller Funeral Home in Saline with Reverend Beth Foster, officiating. Visitation will be on Sunday, October 13, 2013 from 1:30 P.M. until the time of the Services. Cremation will follow the services and Celia’s cremated remains will be interred privately at Marble Park Cemetery in Milan, MI. Contributions may be made to the Saline Evangelical Home and to Arbor Hospice and envelopes will be available at the funeral home. To sign Celia’s guestbook, to leave a memory, or for more information or directions please visit www.rbfhsaline.com.

The family of Celia Mary Briggs created this Life Tributes page to make it easy to share your memories.

Send flowers to the Briggs family.