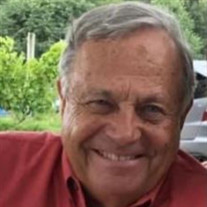 Charles “Chuck” Frederick McGill, 75, of Napoleon, Michigan passed away on Tuesday, January 12, 2021 with his family by his side. Chuck was born on July 16, 1945 to the late Loretta (Gillig) McGill and Charles F. McGill. He proudly served in the United States Navy and as a reserves police officer with the Saline Police Department for 35 years. With training he received in the U.S. Navy, Chuck worked in the dental industry for over 40 years. He is survived by his wife, Jody (Ruehl) McGill, his two children, Darin McGill of Plymouth and Sarah Ramirez of Dearborn; four grandchildren, Cian McGill, Quinn McGill, Nyah McGill, and Zoey Young. He is also survived by his sister, Judith of Farmington Hills and many nieces, nephews and his sister-in-law. Preceded in death by his parents, Loretta and Charles, and his sister, Patricia. Chuck enjoyed living on the lake, and spending time on his boat with family and friends. He was a proud member of the American Legion Post # 322 in Saline, MI. Visitation will be open to the public on Monday, January 18, 2021 from 10:00 A.M. until 3:30 P.M. at the Robison-Bahnmiller Funeral Home in Saline. For those attending social distancing and masks will be required and due to capacity restrictions you may be asked to wait. Memorial contributions in his name may be made to the American Legion Post # 322 Scholarship Fund and envelopes will be available at the funeral home. To sign Chuck’s guestbook, to leave a memory or for more information please visit www.rbfhsaline.com.

The family of Charles F. McGill created this Life Tributes page to make it easy to share your memories.

Send flowers to the McGill family.