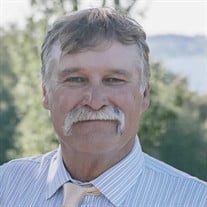 Chauncey Wendell King, Jr “Bud” 68, of Saline, Michigan passed away on Monday, April 26, 2021. Bud was the son of the late Chauncey Wendell King, Sr “C.W” and the late Jolene Hinton King. He was predeceased by his loving wife Penny Sue King and his brother Timothy Wayne King (Pam). Bud is survived by his three children, Chris (Melissa) King, Melonie (Doug) Baugh, and Matt (Jessie) King and eight grandchildren, Rory and Everly King, Kaylin Brown, Kyrin and Kaden Thompson, Ryley and Chance Baugh, and Pennington King. He is also survived by siblings, Mary (Gary) Thomas and Stephen (Jeannine) King and many nieces and nephews. Bud was an entrepreneur who had owned several successful companies. He was a dedicated and hard worker in the construction and trucking industries. It was through his profession that he met his beautiful and amazing wife, Penny. She was waiting tables at a restaurant where he often ate after work and asked her out. When Bud went to over her house to pick her up, her dad answered the door. It was a bit awkward at first as Bud did not realize that she was the daughter of a guy he had known from some construction jobs. They were married in 1973 and were together for 36 years until her death. They were devoted partners in life and their businesses. Bud’s center of life was his family. He enjoyed being with his children whether it was on a family vacation or helping out with a project. He adored his grandchildren and loved spending time with them. He was at their births and attended every event he could –be it band, sports, or dance recitals. He was the backbone of the family and only a phone call away. He was also a beloved and generous son, brother, uncle, cousin and friend who never hesitated to help out where he could. He had a laugh that was contagious and an amazing sense of humor, which made everyone laugh until they hurt. He would provide unique words of wisdom that are often quoted at family gatherings that have become his legacy. Bud could fix, rebuild and fabricate anything—whether it was an old car, equipment for work, or something needed for a project—his talents were endless. He loved riding his motorcycle and visiting with friends on trips to Arizona, Florida and Texas. He enjoyed watching John Wayne movies and old TV westerns when he was relaxing. Bud was a humble person of immense integrity who will be greatly missed. Friends may join the family for a time of visitation on Friday, April 30, 2021 between the hours of 4:00 P.M. and 8:00 P.M. at the Robison-Bahnmiller Funeral Home in Saline. Due to current restrictions, capacity will be limited and masks and social distancing will be required. A graveside service will be held on Saturday, May 1, 2021 at 12:00 Noon at the Riverside Cemetery in Clinton, MI with Pastor Bob Riddle officiating. In lieu of flowers, memorial contributions in his name may be made to the Ronald McDonald House. To leave a memory you have of Bud, to sign his guestbook or for directions please visit www.rbfhsaline.com.

The family of Chauncey "Bud" W. King Jr. created this Life Tributes page to make it easy to share your memories.

Send flowers to the King family.