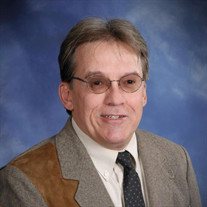 Clarke Hills Macy of Saline, MI, passed away peacefully on Monday, November 9, 2020 in the care of his loving family. Clarke was born in Jackson, MI on April 22, 1958 and was preceded in death by his parents, Harriet Binning (Hills) Macy and John Bevan Macy. He is survived by his wife Jacquelyn Macy, his two sons Christopher and Clayton, daughter-in-law Shannon and two grandchildren Pierce and Kayla, his brother Philip Macy and wife Madeleine Macy and their son Evan along with his wife Lauren. Clarke graduated from the University of Michigan School of Business Administration in 1980. He began his 39-year career with AT&T in Midland, MI as an Account Executive, managing sales of long distance services to Fortune 500 corporations. Also in 1980, Clarke met his future wife, Jacquelyn Macy and the two would later marry in fall of 1982. Throughout his lifetime Clarke was an avid bicyclist, often riding for hundreds of miles across the state of Michigan. His favorite was the DelMac, a 5 day ride from Lansing, MI to the Mackinac Bridge. In 1992, Clarke moved with his family to Saline, MI where he became an accounting manager with AT&T in roles as a Financial Controller and Financial Operations Manager. In 2000, Clarke joined the Institute of Management Accountants and later became a Certified Financial Manager (CFM) and Certified Management Accountant (CMA). Clarke and his family joined the Saline United Methodist Church upon their move to Saline in 1992 where Clarke later discovered his life passion. In 2008, Clarke was one of the founders of the Saline, MI chapter of Mobility Worldwide – a non-profit organization established to produce hand powered carts given freely to disabled individuals in underdeveloped nations around the globe. Clarke would later serve as the secretary and treasurer of Mobility Worldwide – Saline, MI, that has built and distributed more than 490 carts. Clarke had a strong passion to create, build, and help those in need. He split his time between the workshop and his office where he spent countless hours purchasing supplies, equipment, building components, and working to raise funds to keep the organization moving. An outdoor service for friends and family will be held on Monday, November 16, 2020 at 2:00 P.M. at the First United Methodist Church of Saline located at 1200 N. Ann Arbor St., Saline, MI 48176. Guests are respectfully requested to wear a mask and adhere to social distancing guidelines. In lieu of flowers, the Macy family asks that you join in honoring Clarke by supporting his mission. Checks can be made payable to Mobility Worldwide- Saline, MI or donate online at: https://mobilityworldwide.org/affiliates/michigan-saline To sign Clarke’s guestbook, to leave a memory, for more information or directions please visit www.rbfhsaline.com.

Clarke Hills Macy of Saline, MI, passed away peacefully on Monday, November 9, 2020 in the care of his loving family. Clarke was born in Jackson, MI on April 22, 1958 and was preceded in death by his parents, Harriet Binning (Hills) Macy and... View Obituary & Service Information

The family of Clarke Hills Macy created this Life Tributes page to make it easy to share your memories.

Send flowers to the Macy family.