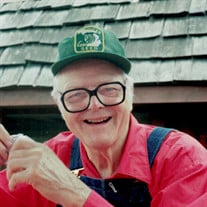 Clayton Stanley Ernst, age 93, passed away peacefully on Saturday, August 10, 2019. He was born on April 10, 1926 in Saline Township, MI the son of the late George and Viola (Ahrens) Ernst. He graduated from Saline High School class of 1945, then completed an MSU short course in Agricultural Science. Clayton married Ruth Stollsteimer on July 6, 1947 at Ruth’s childhood home, where they continued to reside for 72 years. Clayton was a lifelong farmer and worked at the Chrysler Proving Grounds for 21 years. After retiring, he remained active on the family farm. He enjoyed raising sheep and canola. Throughout his farming career, he designed and built many innovative devices used on the farm. He was a member of the National Canola Association, where he lobbied in Washington several times. His hobbies included collecting and restoring Hit and Miss Engines and Steam Tractors. He also enjoyed attending Steam Engine Shows. Clayton was a man of faith and attended St. Thomas Church for many years. Clayton and Ruth have four children, Carol (Ernst) Manny and David (Farrell) of Dexter; Gary and Teri (Boling) of Howell; Alvin and Joan (Ottoman) of Ann Arbor; and Kevin and Amy (Scherdt) of Manchester, 13 grandchildren, 17 great-grandchildren, with 3 more great-grandchildren expected soon. Much to Clayton’s delight, all his family resides locally. Visiting with family was the highlight of his day, as well as calls and visits from friends, neighbors, and meals on wheels volunteers. He was preceded in death in addition to his parents by 2 brothers, Kenneth and Harold, a sister, Wilma (Smith), and 2 grandchildren, Garbiel and Andrew Manny. Funeral Services will be held on Friday, August 16, 2019 at 11:00 A.M. at St. Thomas Lutheran Church in Ann Arbor, MI with Pastor Coleman Geraci officiating. Burial will take place in the St. Thomas Church Cemetery. Friends may join the family for a time of visitation on Thursday, August 15, 2019 at the Robison-Bahnmiller Funeral Home in Saline from 2:00 P.M. until 7:00 P.M. and again on Friday at the church from 10:00 A.M. until the time of service at 11:00 A.M. Memorial contributions in his name may be made to St. Thomas Lutheran Church or Meals on Wheels.and envelopes will be available at the church. To sign Clayton’s guestbook, to leave a memory, or for directions please visit www.rbfhsaline.com.

Clayton Stanley Ernst, age 93, passed away peacefully on Saturday, August 10, 2019. He was born on April 10, 1926 in Saline Township, MI the son of the late George and Viola (Ahrens) Ernst. He graduated from Saline High School class of 1945,... View Obituary & Service Information

The family of Clayton S. Ernst created this Life Tributes page to make it easy to share your memories.

Send flowers to the Ernst family.