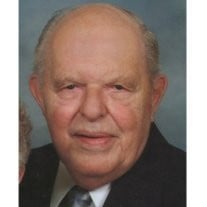 Age 87 passed away on Monday, November 25, 2013, at the Linden Square Assisted Living Facility in Saline, Michigan. He was born in Redford on August 9, 1926 to Lloyd and Beatrice (Horwood) Busha. On January 25,1947 in Fowlerville, Michigan, Cliff married Julie McGuire; she survives. Cliff and Julie were blessed with three sons, Rick (Linda), Mike, and Gary (Becky), and was preceded in death by Rick in 2009 and Gary in 2010; Mike survives along with Cliff's brother, Frank Busha of Plymouth and sister, Nancy (Pat) Robinson of Fort Myers, Florida. He is also survived by eight Grandchildren, two Great-Grandchildren and several nieces and nephews. Cliff was employed for 35 years by the Hydramatic Division of General Motors Corporation. He and Julie enjoyed dancing and in his early years Cliff called square dances in various public places in addition to the Saddle Ridge Riding Club. He was also a Past-President of the Tri-County Sportsman's Club. A Mass of the Christian Burial will be prayed on Wednesday, November 27, 2013 at 11:00 A.M. at the St. Joseph Catholic Village Church, 3430 Dover St. (at the corner of Dover and Fourth Streets) in Dexter, MI, with Fr. Brendan Walsh as celebrant. Burial will take place following the service at Oakwood Cemetery in Saline. In lieu of flowers memorial contributions may be made to St. Joseph Catholic Village Church. Envelopes will be available at the Robison-Bahnmiller Funeral Home in Saline, MI, where friends may begin calling on Tuesday, November 26, 2013 between the hours of 2:00 P.M. and 8:00 P.M. and also at the church on Wednesday, November 27, 2013 from 10:00 A.M. until the time of service at 11:00 A.M. A Scripture Service will take place on Tuesday, November 26, 2013 at 7:00 P.M. at the funeral home. To sign Cliff’s guestbook, to leave a memory, or for more information or directions please visit www.rbfhsaline.com.

Age 87 passed away on Monday, November 25, 2013, at the Linden Square Assisted Living Facility in Saline, Michigan. He was born in Redford on August 9, 1926 to Lloyd and Beatrice (Horwood) Busha. On January 25,1947 in Fowlerville, Michigan,... View Obituary & Service Information

The family of Clifford Lloyd Busha created this Life Tributes page to make it easy to share your memories.

Send flowers to the Busha family.