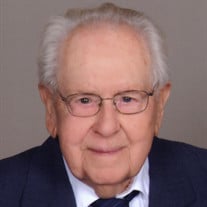 Olson, Clifford Stanley, age 97, passed away peacefully on Tuesday, January 29, 2019, at Wellbridge of Pinckney. Clifford was born in Hamden Township, Minnesota, on October 9, 1921, the son of Sigvald and Hilda (Carlson) Olson. From a young age he worked on the farm of his step-father Lester Bjerke and later worked at neighboring farms. Cliff first came to Michigan when he was 19 and again at 20 when he started work for the Argus camera company in Ann Arbor. He met Mildred Pfitzenmaier at a dance at the Grange Hall; soon after they married on February 25, 1943, at St. Paul U.C.C. in Saline. Cliff was supervisor of quality control at Argus for 19 years until he left in 1962. Cliff and Mildred were owners of Lodi Hardware in Saline through 1972. Cliff became a realtor in Saline until he retired in 1992. Cliff was a member of St. Paul U.C.C. and served as president of the church council. He was a member of Tri-County Sportsmen’s League in Saline where he served as treasurer and president. Cliff and Mildred enjoyed spending time with family and friends. Cliff loved to fish and tinker in his garage. Cliff is survived by son Ronald (Nancy) Olson of Ypsilanti, daughter Pamela (Eric) Peterson of Pinckney, son-in-law Tom Metty of Dexter, grandchildren: Tammy (Mark) Vinton, Kristina (Jeremiah Pfahlert) Coffey, Angela (Bryan Rucinski) Olson, Julie (Aaron) Bennett, Lisa (Matthew) Helfen, James (Michelle) Olson, eight great-grandchildren, and one great-great grandson; sisters: Anna (Herbert) Jones of Ann Arbor, Mae LaBounty of Phoenix, AZ; and cousins: Katherine Stollsteimer of Saline, Patsy Stollsteimer of Saline. Cliff was preceded in death by his parents, wife Mildred, daughter Jerri Lynne Metty, grandson Roger Coffey, great-grandson Joshua Helfen, brothers: Melfred Olson, Alfred Olson, Cyril Olson, Leo Bjerke; and sisters: Sylvia Kind, Gloria Hagen, Audrey Miller. Visitation will be held at the Robison-Bahnmiller Funeral Home in Saline on Monday, February 4, 2019, between the hours of 3:00 PM and 7:00 PM, and at St. Paul U.C.C. in Saline on Tuesday, February 5, from 2:00 PM until 3:00 PM. Funeral services will be held at 3:00 PM on Tuesday, February 5, 2019, at St. Paul U.C.C. Burial will follow in the Lodi Township Cemetery, followed by a luncheon at Tri-County Sportsmen’s League in Saline. In lieu of flowers donations can be made to St. Paul U.C.C. and envelopes will be available at the funeral home and at the church. To leave a memory you have of Cliff, to sign his guestbook or for directions please visit www.rbfhsaline.com

Olson, Clifford Stanley, age 97, passed away peacefully on Tuesday, January 29, 2019, at Wellbridge of Pinckney. Clifford was born in Hamden Township, Minnesota, on October 9, 1921, the son of Sigvald and Hilda (Carlson) Olson. From a young... View Obituary & Service Information

The family of Clifford S. Olson created this Life Tributes page to make it easy to share your memories.

Send flowers to the Olson family.