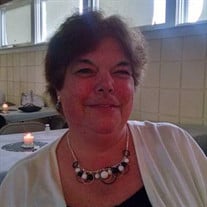 Age 56, passed away on Thursday, August 11, 2016 at her home. She was born on July 24, 1960 in Saline, MI, the daughter of Howard J. and Darlene L. (Klumpp) Webber. On October 14, 1995 she married Michael Evans and he preceded her in death in December of 2007. During her lifetime Cynthia liked taking pictures, and cross stitching. Most of all though she loved UofM Football and her two dogs Mason and Josie. Survivors include her brother Scott Webber, her Godmother Barbara Stierle, brother-in-law Mel Evans Jr., brother-in-law Paul (Chris) Evans and their children Erin and Dahlia, cousins Brian (Deidra) Stierle, Timothy Potter, Jessica and Conner Potter, David (Sheryl) Webber and his children Joshua (Alicia) Webber (children Aiden and Asher), Hanna (Aaron) Compton (children Liam and Tessa), and Holly (Tristin) Griffin (child Cameron), second cousin James Stierle, and Brennan Potter. Cynthia was preceded in death in addition to her husband Michael by her parents, her uncle Harry Webber, uncle Jim Stierle, and her cousin Lori Potter. Funeral Services will be held on Wednesday, August 17, 2016 at 11:00 A.M. at the St. Paul United Church of Christ in Saline with Rev. Dr. David Bucholtz officiating. Burial will follow in the Lodi Township Cemetery in Saline. In lieu of flowers memorial contributions may be made to St. Paul U.C.C. or to the American Diabetes Association. Envelopes will be available at the Church where friends may begin calling on Tuesday, August 16, 2016 between the hours of 4:00 P.M. and 8:00 P.M. and again on Wednesday, August 17, 2016 from 10:00 A.M. until the time of service at 11:00 A.M. To sign Cynthia’s guestbook, to leave a memory, or for more information or directions please visit www.rbfhsaline.com.

The family of Cynthia L. Evans created this Life Tributes page to make it easy to share your memories.

Send flowers to the Evans family.