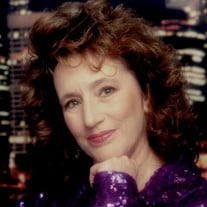 Darlene Abbott, age 65, died on Tuesday, November 22, 2016 at home following a long 4 year existence with lung cancer. In her final hours she was surrounded by happy memories, comfort, and love. She was born September 5th, 1951, in Ann Arbor, Michigan to Raymond and Agatha (Dreffs) Milbocker. She was the second of five children and the only daughter. She grew up with modest means and though her early years were sometimes tumultuous, she learned resilience and determination; two traits that she proudly nurtured until her last breath. Darlene was a Mother to all who met her. Her encouragement, support, and wisdom were thoughtful and thorough. She found satisfaction in her ability to think through situations from many points of view and encouraged those she cared about to do the same. She met her husband, Steve, in 1980, at work. They married February 20th, 1982 in a small service at St. Francis of Assisi in Ann Arbor, Michigan. Darlene spent 27 years working for the University of Michigan. She began her journey in 1979 as a meat cutter, and concluded her career as an Administrative Manager overseeing all aspects of operation at MStores. She found great joy and meaning in having earned her position through years of hard work, sacrifice, and dedication. The people she worked with became family and the building they worked in became a second home. Darlene was able to retire prior to the closing of Stores in 2005. She lamented having to move on from her life at “the U”, but like many other instances in her life, she paused to reflect, gathered herself and her plan, and then pushed forward to the future. Following her retirement, Darlene kept herself busy by working for Aunt Millie’s, Zahn’s Auto Body, and most recently, American Soy Products. She enjoyed learning the nuances of new industries and she valued the knowledge and friendships she found along the way. Her free time was spent gardening and bird watching. She and her husband, Steve, spent much of their time nurturing their backyard, growing it into a sanctuary for squirrels, chipmunks, groundhogs, bunnies, opossums, raccoons, flying squirrels, two ducks, and even a fox on occasion. She found a hobby in photography and filled albums with snapshots of the backyard visitors. Her life was remarkable and filled with stories and experiences, but some of her proudest moments were: caring for her brothers when they were young, buying a Corvette when she was 23 years old, the birth of her daughter, Deborah, and going back to college at age 54. Darlene is survived by her husband, Steve; daughter, Deborah (Gilbert) Romero; brothers Don Milbocker, Tom Milbocker, Den Milbocker; sisters-in-law, Lori Milbocker, Elaine Milbocker, and Patty Jackson; her beloved nieces, nephews, and great nieces; many friends and acquaintances. She was preceded in death by her parents, Raymond and Agatha Milbocker; brother, Ron Milbocker; niece Shelly Milbocker. Visitation will be held on Sunday, December 4, 2016 between the hours of 10:00 A.M. and 1:00 P.M. at the Robison-Bahnmiller Funeral Home in Saline. A private memorial service for immediate family will be held following the visitation. Memorial contributions in her name may be made to the Humane Society of Huron Valley and envelopes will be available at the funeral home. To sign her guestbook, to leave a memory, or for more information or directions, please visit www.rbfhsaline.com.

Darlene Abbott, age 65, died on Tuesday, November 22, 2016 at home following a long 4 year existence with lung cancer. In her final hours she was surrounded by happy memories, comfort, and love. She was born September 5th, 1951, in Ann Arbor,... View Obituary & Service Information

The family of Darlene Agatha Abbott created this Life Tributes page to make it easy to share your memories.

Send flowers to the Abbott family.