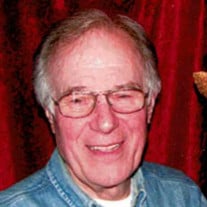 David passed away suddenly at his home on Monday, November 2, 2015. David was born on Christmas Day December 25, 1936 in Dayton, Ohio, the son of Richard E. and Hazel B. (Dorsey) Baker. In June of 1984 he married Elizabeth “Betsy” Ostrander, and she survives. David went to Auburn High School in Auburn, IN and graduated in the class of 1955. He was a proud member of the United States Air Force and served from 1959 to 1963 in Homestead, FL. Dave received his BS in Electrical Engineering from Indiana Institute of Technology Fort Wayne, IN. During his lifetime David worked as an Electrical Engineer for CTS in Elkhart, IN, as a Production Engineer. Then at Elco Thermoplastics in Mishawaka, IN. Dave was then recruited by Ford Motor Co. in 1990. While at Ford he managed over 45 suppliers with an annual budget of over $100 million. He made significant contributions in the development of Ford commodity strategies and selection of best in class domestic and international supply base. Dave retired from Ford in 2007 but couldn't sit still so in 2012 he supervised injection molding at Faurecia in Saline. In 2013 he began consulting work again with Ford. David joined the Society of Plastics Engineers in 1974 and was an active member for over 30 years. He served as President of the society from 1976 to 1977. He attended every T-ball game of Michael's and every swim meet. He was at every cross county meet and choir performance of Katie's and every track and field and band performance of Jennie's. He even became an “honorary girl scout” so he could go on camping trips with the girls. David also loved his grandson Alex very much and shared his love of nature with him. Betsy and David traveled to Ireland, Hungary, and Italy and those trips were some of the highlights of his life. The trip he was most fond of however was to the Outer Banks to see his daughter Jennie be married to Andrew. David was a kind soul and was a friend to everyone he met. Other survivors in addition to his wife include their children Michael Scheeringa, Katie Baker, Jennie and her husband Andrew Skuzenski, his Grandson Alex, and his brother Brian Baker. He was preceded in death by his parents. Cremation has taken place. A Mass of the Christian Burial will take place on Friday, November 27, 2015 at 11:00 A.M. at the St. Andrew the Apostle Catholic Church in Saline, with Rev. Fr. Francis Mossholder as celebrant. Military honors will follow under the auspices of the Veterans Honor Guard of Washtenaw County. Memorial contributions may be made to the National Multiple Sclerosis Society, or to the family to cover the cost of flowers. Envelopes will be available at the church where friends may begin calling on Friday, November 27, 2015 from 10:00 A.M. until the time of Mass at 11:00 A.M. To sign David’s guestbook, to leave a memory, or for more information or directions please visit www.rbfhsaline.com.

The family of David C. Baker created this Life Tributes page to make it easy to share your memories.

David passed away suddenly at his home on Monday, November 2,...

Send flowers to the Baker family.