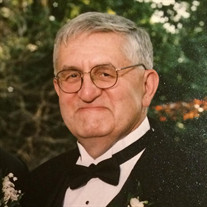 Age 74 passed away on Sunday, January 17, 2016 at the University of Michigan Hospital in Ann Arbor. He was born October 18, 1941 in Detroit, MI, the son of Ross Lee and Jesse (Grant) Bowbeer. On June 11, 1966 in the Blessed Sacrament Church in Windsor, Ontario, he married Lynne Bowman and she survives. Dave began his lifelong love of Scouting and the outdoors as a Cub Scout in 1948. He earned the rank of Eagle Scout in 1957, and he continued his involvement in various capacities through the 1980’s. He earned a bachelor’s degree in biology from Wayne State University and a master’s degree in microbiology from Eastern Michigan University. He worked at the University of Michigan, conducting medical research until the early 1970’s. He also worked for the Boy Scouts as a District Executive. He then began a career with Saline Community Hospital as its Director of Purchasing, from which he retired in 2000. Dave was a history buff and was particularly interested in American and local history and politics. His community involvement included posts with the Uptown Saline Association, Historic District Commission, and United Way, as well as other roles with his children’s schools and various sports. He was known by many for his prolific storytelling ability. In addition to those who survive him, he will be missed by the “seminar” tables at Benny’s Bakery in Saline. He was a devoted family man and friend. Above all, his greatest loves were his wife, children, and grandchildren. Survivors in addition to his wife include their children Erin (Steve) Babiak, and Lee (Michelle Poris) Bowbeer. Other survivors include his grandchildren Cameron and Ellie Babiak, Jordan and Alex Bowbeer, his brother Robert Bowbeer, brother-in-law Patrick, sisters-in-law Donna, Cathy, Teresa, Pam, and many nieces and nephews. Dave was preceded in death by his parents, father-in-law Patrick Bowman, mother-in-law Betty Bowman, and brothers-in-law Mike and Brian Bowman, and Ken Westlake, and sister-in-law Suzan Bowman. Funeral Services will take place on Thursday, January 21, 2016 at 11:00 A.M. at the Keystone Church in Saline, MI, with Pastor Ken Gilmore officiating. Burial will follow the service in the Oakwood Cemetery in Saline. Memorial contributions may be made to The Chad Tough Foundation. Friends may begin calling at the Robison-Bahnmiller Funeral Home in Saline on Wednesday, January 20, 2016 between the hours of 1:00 P.M. and 7:00 P.M. and at the church on Thursday, January 21, 2016 from 10:00 A.M. until the time of service at 11:00 A.M. To sign Dave’s guestbook, to leave a memory, or for more information or directions please visit www.rbfhsaline.com.

Age 74 passed away on Sunday, January 17, 2016 at the University of Michigan Hospital in Ann Arbor. He was born October 18, 1941 in Detroit, MI, the son of Ross Lee and Jesse (Grant) Bowbeer. On June 11, 1966 in the Blessed Sacrament Church... View Obituary & Service Information

The family of David Ross Bowbeer created this Life Tributes page to make it easy to share your memories.

Send flowers to the Bowbeer family.