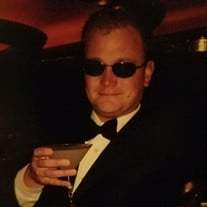 David Richard Wizgird, 46, of Saline, Michigan, previously of Livonia, Michigan passed away on July 13th, 2017. David was born on March 17, 1971, to the late Richard Wizgird and Janet Wizgird (John VanRiper). David is survived by the love of his life, his soulmate and wife Martha (Swiger) whom he married on September 16, 2006. He was also survived by his son Richard "Ricky" Clayton, his sister Elizabeth (Mike) Kowalski, and his nephews John and Nicholas. David was also loved by many aunts, uncles and cousins. He will be deeply missed by all. David was a graduate of Eastern Michigan University and the President of Hear Clear, Inc. He enjoyed golf and spending time with his best buddy, his son, and their dog Hat Trick. David loved being the manager of Ricky's hockey team and coaching T-Ball every year. Those who knew him were blessed; he was the kindest, most gentle, giving man God ever created. How lucky we were to share this world with him, if only for such a short time. In keeping with David's loving and generous spirit it was his decision to donate life so that others may live, through the Gift of Life Michigan. Family will receive friends on Tuesday, July 18th from 4pm - 7pm at Robison-Bahnmiller Funeral Home, 301 E. Michigan Ave., Saline, MI 48176. Funeral Service will be Wednesday, July 19th at 11:00am at Robison-Bahnmiller Funeral Home with a visitation starting at 10:00am. In lieu of flowers it has been requested by the family to make donations in memory of his father David Richard to Ricky's Michigan Education Savings Plan c/o Janet Wizgird 1503 Maplewood, Saline, Michigan 48176. Envelopes will be available at the funeral home. Burial will follow at Oakwood Cemetery in Saline where he will be laid to rest with his father. To sign David's guestbook, to leave a memory, or for more information or directions please visit www.rbfhsaline.com.

David Richard Wizgird, 46, of Saline, Michigan, previously of Livonia, Michigan passed away on July 13th, 2017. David was born on March 17, 1971, to the late Richard Wizgird and Janet Wizgird (John VanRiper). David is survived by the love... View Obituary & Service Information

The family of David Richard Wizgird created this Life Tributes page to make it easy to share your memories.

Send flowers to the Wizgird family.