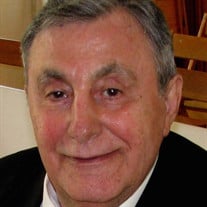 Age 76, passed away on Wednesday, October 15, 2014 at his home, with his family by his side. He was born on June 10, 1938, in Grottaglie, Italy - in the province of Toranto, the son of Marcello and Caterina (Augostonelli) Falcicchio. On July 2, 1997 in Ann Arbor, MI, he married Jeanne and she survives. Dean played semi-pro soccer in Italy as teenager and young adult. He soon joined the Scuola Specialisti A.M., which is the Military School in Italy. This school provides training for young adults who want to be Sergeants in the air force. It is the Italian version of Texas A.M. He first came to the United States around late 1959. He was stationed at Lackland/Kelly Air Force Base in San Antonio. He returned to Italy in the Fall of 1960. In September 1962, Dean returned to the States. He lived in Queens, N.Y., where he worked as an electronic technician. He then moved to San Antonio, TX, where he began working at Santa Rosa Hospital also as an electronic technician. Around 1965 he began working at German Hi-Fi alongside the owner, Fred Grimm. Mr. Grimm became one of his closest friends and would remain friends with him for many more years. Dean continued working at German Hi-Fi, on the weekends, after he had joined the FAA in 1966. He was based out of Kelly-Lackland Air Force Base. He would often be sent by the FAA to Shreveport, LA. to attend classes. In 1968 the FAA sent him to the Philippines, for 6 months, where he helped set up their airway facilities. By early fall of 1972 the FAA began sending him to Oklahoma City, to attend the FAA Academy. Dean worked with the Federal Aviation Administration (FAA) from 1966-2003. He received many awards for leadership and excellence, and voted Manager of the Year from all sectors of airway facilities throughout the US, five different times throughout his service. He was presented the American flag that flew over the US capitol at the time of his retirement for commendable service; a great honor recognizing his excellence in his service to his country. He was a very patriotic man. He loved all veterans and current military personnel. His favorite charity was Wounded Warriors and he made contributions each month for many years. Another passion of Deans' was his love for children. He contributed each month to St. Jude's Hospital; these contributions will continue on in his memory. Dean was loved immensely by his wife, children and granddaughters. His love for his family was very deep and caring. We will miss him always. His family never said goodbye, but instead "See you later." For they know God's mercy will make this so. Survivors in addition to his wife Jeanne include their children Kathy Falcicchio of Mt. Pleasant, Marcella (Matt Schwagle) Falcicchio of Ann Arbor, MI, and Kasey (Chance) Adkins of Ann Arbor, MI. Other survivors include precious granddaughters Gianna, Izabella and Ashley, his sister Lia Falcicchio of Iesi, Italy, and his nephew Giovanni Belardinelli. He was preceded in death by his parents and his very close brother-in-law Giulio Belardinelli. Cremation has taken place. A Memorial Service will take place on Saturday, October 18, 2014 at 11:00 A.M. at the Robison-Bahnmiller Funeral Home in Saline, MI, with Rev. Ian Twiss officiating. Memorial contributions may be made to St. Jude’s Childrens Research Hospital or to the Wounded Warrior Project. Envelopes will be available at the funeral home where friends may begin calling on Saturday, October 18, 2014 from 10:00 A.M. until the time of service at 11:00 A.M. To sign Dean’s guestbook, to leave a memory, or for more information or directions please visit www.rbfhsaline.com.

Age 76, passed away on Wednesday, October 15, 2014 at his home, with his family by his side. He was born on June 10, 1938, in Grottaglie, Italy - in the province of Toranto, the son of Marcello and Caterina (Augostonelli) Falcicchio. On July... View Obituary & Service Information

The family of Dean V. Falcicchio created this Life Tributes page to make it easy to share your memories.

Send flowers to the Falcicchio family.