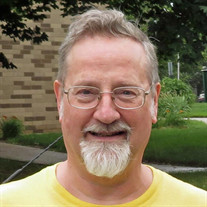 Dennis Paul Giszczak, 66, of Lansing, Michigan passed away on Thursday, February 17, 2022. Dennis was born September 24, 1955 to Irma (Myers) Giszczak and Thaddeus Giszczak in Defiance, Ohio. When Dennis was 4 years old, the family moved to Saginaw, Michigan. Dennis attended schools in Saginaw Township. Dennis received a Bachelor’s of Music degree from the University of Michigan. He did additional work towards a master’s degree in music. He also received a Master’s degree in Library Science. Dennis worked in the University of Michigan library system for a number of years. Later he moved to Lansing and worked for the Cooley Law School library. Dennis was a member of the University of Michigan Men’s Glee Club while a student there. He later helped found the men’s choral society, Measure for Measure. He was the group’s piano accompanist for many years. Dennis was a kind and generous person and loved jokes and puns. He worked crossword puzzles and jigsaw puzzles. He enjoyed cooking and his chili was notorious. Dennis is survived by a brother Richard (Elizabeth) Giszczak of Saline and a sister Mary (James) Morris of Gastonia, North Carolina and many nieces and nephews. Dennis was preceded in death by his older brothers, Stephen Giszczak of Raleigh, North Carolina, and Michael Giszczak of Ann Arbor, Michigan. The family will receive friends on Tuesday, February 22, 2022 from 5:30 P.M. until 7:30 P.M. at the Robison-Bahnmiller Funeral Home in Saline, MI. Funeral service will be held on Wednesday, February 23, 2022 at 12:00 P.M. at the funeral home with visitation from 10:00 A.M. until the time of service at 12:00 noon. Memorial contributions may be made to Measure for Measure, Ann Arbor, MI (measure-for-measure.org) and envelopes will be available at the funeral home. Burial will be at Arborcrest Memorial Park, Ann Arbor, MI at a later date. To sign Dennis’ guestbook, to leave a memory, or for more information or directions please visit www.rbfhsaline.com.

The family of Dennis P. Giszczak created this Life Tributes page to make it easy to share your memories.

Dennis Paul Giszczak, 66, of Lansing, Michigan passed away on...

Send flowers to the Giszczak family.