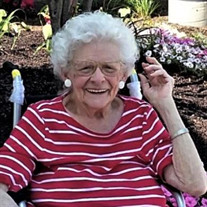 Dolores Virginia Biggs Fisher, age 92, passed away peacefully on Tuesday, August 21, 2018 at the Saline Evangelical Home in Saline, Michigan. She was born on January 12, 1926 in West Liberty, West Virginia to Earl and Letha Biggs. She was the youngest of two daughters. Dolores graduated from West Liberty High School in 1944 and from West Liberty State College in 1948. She earned her B.A. degree and was a member of the F.G.A. Alpha Tau Sorority and the Art Club. She was an avid basketball player and cheerleader. Dolores was very active in sports. She began her teaching career in the Fulton County Public School District, West Virginia. On August 22, 1949 she married the love of her life, Calvin (Cal) J. Fisher in Capon Bridge, West Virginia. Cal Fisher was in the U.S. Army and was transferred to Fort Belvoir, Virginia where he served as a United States Honor Guard at the Tomb of the Unknown Soldier. Dolores was a dedicated military wife and traveled with Cal and their daughter Beverly to many states. Ultimately ending up in Okinawa, Japan, in 1962, where she continued teaching with the Department of Defense School System until they returned to the states in 1973 and she retired. They settled in Battle Creek, MI where Cal continued his career working for the Federal Government until his passing in 1996. Dolores is survived by one daughter, Beverly Ann Bothwell, who resides in Davison, MI; a loving granddaughter, Jennifer Marie Thomas of Waterford, MI, and a great-granddaughter, Ileigh Jonae Hawkins of Waterford MI. She was preceded in death by her sister, Phyllis Bowery, her parents Earl and Letha Biggs, and a grandson Jonnathan Thomas. She also leaves a loving cousin, Rachel Sincavich of Wheeling, West Virginia and her caring friend Richard Dillard of Battle Creek, MI. Dolores spent her last days at Saline Evangelical in Saline, MI. She greatly appreciated the caring and loving staff that will miss her stories and antics. Dolores genuinely loved her caregivers. Dolores will be joining Cal in Arlington National Cemetery in the spring of 2019. As we release the Spirit we hold onto the Love. Dolores was active in the Veterans Organizations and cared deeply about our countries Vets. Memorial donations in her name may be made to the Purple Heart or any Veterans Organization would be appreciated. To leave a memory, to sign her guestbook, or for more information please visit www.rbfhsaline.com.

Dolores Virginia Biggs Fisher, age 92, passed away peacefully on Tuesday, August 21, 2018 at the Saline Evangelical Home in Saline, Michigan. She was born on January 12, 1926 in West Liberty, West Virginia to Earl and Letha Biggs. She was the... View Obituary & Service Information

The family of Dolores Virginia Fisher created this Life Tributes page to make it easy to share your memories.

Send flowers to the Fisher family.