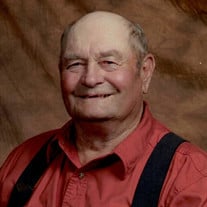 Donald H. Drake of Ann Arbor, Michigan passed away after a brief illness on Sunday, December 20, 2020 at the St. Joseph Hospital in Chelsea, MI at the age of 84. Don was born on July 27, 1936 in Lodi Township, to the late Harold A. and Alma (Jedele Gensley) Drake. On December 3, 1954, he married the late Janet (Walker) Drake at St. John’s Lutheran Church in Bridgewater, MI. Don is survived by his eight children: Joddy (Fred) Hieber of Ann Arbor; Paula Drake of Ann Arbor; LeAnn Drake of Ann Arbor; Steven (Leslie) Drake of Ann Arbor; Jeffrey (Kelly) Drake of Saline; Brenda (Ralph) Hoelzer of Ann Arbor; Curtis Drake of Ann Arbor; and Mark (Angela) Drake of Ann Arbor. He also has 14 grandchildren: Kimberly (Kyle) Olberg; Erica and Dustin Drake; Britain (Lauren Langton) and Bennett Drake; Kelsey (Jay) Miller, Jacob, Derek, and Ethan Hoelzer; Michael and Andrew (Paige Downer) Drake; and Danielle Bunney, Gage and Ashton Drake; great-grandchildren: Kenley and Maverick Miller. Don is also survived by his sister, Katherine Fodor of Hemet, CA, and sisters-in-law, Audrey Gensley of Ann Arbor, MI, Pat Drake of Richmond, KY and many nieces, nephews, cousins and dear friends. He was preceded in death by his brothers: Ralph (Ruth) Gensley, Earl Gensley, and Robert Drake; and grandson Joshua Hoelzer. Don was a lifelong dairy farmer which he shared with his sons. He was one of the founding members of the Michigan Tractor Pullers Association started in 1969 which he loved and was devoted to. Don was also proud to be involved with the Saline Community Fair, serving on the fair board since 1973. He was extremely proud to help establish tractor pulling at the Saline Fair. Most recently, you would see Don in the livestock barn or near the show arena watching all of his grandchildren showing their animals. Don had a quick wit and some interesting little sayings that he shared with his children and grandchildren. He had a way to make you smile and add humor to situations unless it involved playing euchre. Don loved to play cards and it was never a true gathering unless some games were played. And don’t forget the homemade wine. Don loved to make and especially share wine. For family and friends who were lucky enough to participate, the annual wine making was an event to be remembered. However, his greatest treasure and accomplishments were his children, grandchildren and great-grandchildren. Friends may join the family for a Celebration of Life Gathering on Sunday, August 8, 2021 between 1:00 P.M. and 4:00 P.M. at the Washtenaw County Farm Council Grounds, Building A. 5055 Ann Arbor-Saline Road, Ann Arbor, MI 48103. In lieu of flowers, memorial contributions in his name can be made to St. John’s Lutheran Church, PO Box 13, Bridgewater, MI 48115. To leave a memory you have of Don or to sign his guestbook, please visit www.rbfhsaline.com.

Donald H. Drake of Ann Arbor, Michigan passed away after a brief illness on Sunday, December 20, 2020 at the St. Joseph Hospital in Chelsea, MI at the age of 84. Don was born on July 27, 1936 in Lodi Township, to the late Harold A. and Alma... View Obituary & Service Information

The family of Donald H. Drake created this Life Tributes page to make it easy to share your memories.

Donald H. Drake of Ann Arbor, Michigan passed away after a brief...

Send flowers to the Drake family.