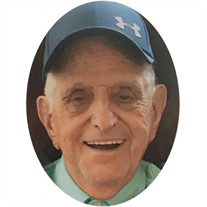 Donald Ormand Fardig, 92, passed away peacefully surrounded by his family on Wednesday, October 6, 2021. He is survived by his wife of 70 years, Arlene, daughter Jude Fardig (Chris Wallace), son David, daughter-in-law MaryAnn Fardig, his grandchildren Lauren Fardig-Diop (Mulay), Amy Khavajian (Mani), Danny Fardig (Randi), Ben Wallace, Hannah Wallace, and his 7 great-grandchildren. He was preceded in death by his son Don “Digger” Fardig, parents Fannie and Arthur, brother Raymond Fardig (Elizabeth), and sister Amy Lytikainen (Paul). The son of Finnish immigrants, Don was born in Detroit but moved to South Dakota as a child, and returned to Michigan with his mother, sister and brother after his father died of pneumonia. He met his future wife Arlene at Central High School in Detroit; they were married after graduation. After the wedding, he enlisted in the Army and was stationed in Germany during the Korean War. He worked for a short time as a bank teller but was urged by friends to apply to become a draftsman at Ford Motor Company due to his neat handwriting. He retired from FoMoCo in 1987 at the age of 58. Don enjoyed coaching and supporting his sons in their hockey and golf endeavors, and supporting his daughter in her career as a Physician Assistant. He was incredibly proud that all three of his children received their undergrad degrees from the University of Michigan. He enjoyed retirement life on Torch Lake and was active in his church community, and as a ranger at A-Ga-Ming Golf Course. He had a strong community of friends. In his free time, he loved doing crossword puzzles, bird watching, playing harmonica, fixing things in his garage and mowing the lawn on his riding mower. He was best known for being handy, for his quick wit, sense of humor, and for being a man of honesty and integrity. The family will hold private memorial services in the future, and would like to thank the wonderful caregivers of Arbor Hospice who worked with Don until the end. In lieu of flowers, memorial donations may be made to: Arbor Hospice 2366 Oak Valley Drive Ann Arbor, MI 48103 and/or the Alzheimer’s Association. To leave a memory you have of Don, to sign his guestbook or for more information please visit www.rbfhsaline.com.

The family of Donald O. Fardig created this Life Tributes page to make it easy to share your memories.

Send flowers to the Fardig family.