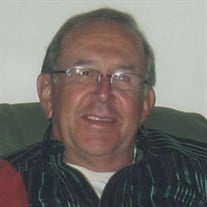 Douglas N. Higgins passed away peacefully with his family by his side on Saturday, October 30, 2021 after a three year illness. Douglas was born on June 18, 1943 in Dundee, MI the beloved son of Norman and Bernice (Kempf) Higgins. Doug grew up in Manchester, MI and was a 1961 graduate of Manchester High School. He was a devoted partner, son, father, grandfather and friend. In 1966, he started his own underground construction company, Douglas N. Higgins, Inc. Much to his pride, it is still family operated to this day. His business sense and extensive knowledge was earned through hard work. Respect for his employees was always top priority, with many working their entire career at Higgins. His word and reputation was paramount. Doug was able to go into the office up to his last week, where his attention to detail was as sharp as ever. He was blessed to have all three of his children and son-in-law working at his company. More importantly, he loved being with his children and family. Spending quality time at his homes in Saline and Florida, as well as at Pleasant Lake, provided many unforgettable memories. Doug treasured his winters in Naples, Florida with Carolyn. He cherished their long bike rides and walks to the beach, as well as visits from their children and grandchildren. Sitting together on the lanai of their condo was one of his favorite moments of the day. His relationship with his grandchildren was one of a kind. Doug never missed a sporting event, school event, graduation or anything that involved them. He was their #1 Fan and they always had his full support in whatever their activity. Doug really enjoyed playing golf with his friends and family. His quiet, competitive nature was often exhibited in his golf matches. He loved being outdoors, especially looking after his landscaping and trees. Mowing his lawn and taking care of his flowers brought him many peaceful times, and his backyard was his sanctuary. Doug is survived by Carolyn Rice, his partner of over 35 years, his children; Kelly (David) Wilkie of Saline, MI, Daniel Higgins of Saline, MI and Bill (Maura) Higgins of Bend, OR; his grandchildren, Ryan, Lauren and Kathryn Wilkie, Kaitlyn and Dawson Higgins, and Liam and Reece Higgins. He is also survived by Carolyn’s children Brenda (Bryan) Little, Carrie (Jason) Braun, and Dawna Rice (Don Ludwig); grandchildren, Amanda Gerber (Chris), Jacob Little, Carly (Cameron) Fulps, Cassidy (Jesus) Alvarez, Caden Stein and Lydia (Eric) Coval.; and great-grandchildren, Owen, Landon, Hudson, Brailynn, Bennett and Lacey. He was preceded in death by his parents, infant brother and numerous aunts and uncles. Cremation has taken place. Per Doug’s request, a private celebration of life will be held at a later date. If desired, donations in Doug’s name may be made to Arbor Hospice and Palliative Care in Ann Arbor, MI or to the United Methodist Retirement Communities in Chelsea, MI; both near and dear to Doug’s heart. Should you want to send written condolences and/or remembrances please send to 3390 Travis Pointe Road, Suite A Ann Arbor, MI 48108 in care of Carolyn Rice and the Higgins Family. To leave a memory you have of Doug or to sign his guestbook, please visit www.rbfhsaline.com.

Douglas N. Higgins passed away peacefully with his family by his side on Saturday, October 30, 2021 after a three year illness. Douglas was born on June 18, 1943 in Dundee, MI the beloved son of Norman and Bernice (Kempf) Higgins. Doug grew... View Obituary & Service Information

The family of Douglas Norman Higgins created this Life Tributes page to make it easy to share your memories.

Douglas N. Higgins passed away peacefully with his family by...

Send flowers to the Higgins family.