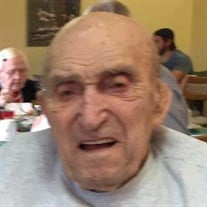 Age 90, passed away on Monday, April 4, 2016 at the Hillside Terrace Retirement Community in Ann Arbor, MI. He was born July 19, 1925 in Ann Arbor, MI, the son of Harold M. and Amanda K. (Schlee) Alber. On August 10, 1946 in Ann Arbor, MI, he married Barbara I. Gillespie and she preceded him in death on August 16, 2011. Duane was a proud member of the United States Navy and served during WWII in the South Pacific. He later went to work for Michigan Bell for over 34 years as a Lineman until his retirement in 1980. Duane was also a member of the Dexter American Legion Post #557, and he loved to hunt and travel when he could. Survivors include their children Ronald (Carolyn) Alber, Bonnie Linder, Katherine (Ray) Taphouse, and a daughter-in-law Linda Alber. Other survivors include several Grandchildren and Great-Grandchildren. Duane was preceded in death in addition to his wife Barbara by their son Donald Alber, daughter Connie Stenke, son-in-law Larry Stenke, son-in-law Ray Linder, grandchildren Ann Stenke and Brenda Stenke, brother Bruce H. Alber, and sister-in-law Esther Alber. Funeral Services will be held on Saturday, April 9, 2016 at 11:00 A.M. at the Robison-Bahnmiller Funeral Home in Saline with Rev. Clark Cothern officiating. Burial will take place following the service in Oakwood Cemetery in Saline. In lieu of flowers memorial contributions in his name may be made to Great Lakes Caring Hospice. Envelopes will be available at the funeral home where friends may begin calling on Friday, April 8, 2016 between the hours of 4:00 P.M. and 8:00 P.M. and again on Saturday, April 9, 2016 from 10:00 A.M. until the time of service at 11:00 A.M. To leave a memory, to sign his guestbook, or for more information or directions please visit www.rbfhsaline.com.

The family of Duane F. Alber created this Life Tributes page to make it easy to share your memories.

Send flowers to the Alber family.