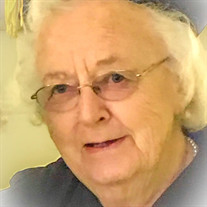 Edith "Edie" Wonnell (née Baldwin) died on December 21, 2019 in Saline, MI due to complications related to dementia and congestive heart failure. She was 88. Edie was born on May 14, 1931 in New Haven, CT to Clarence F. Baldwin and Margaret W. Baldwin. She spent her childhood on the family farm in Woodbridge, CT. She graduated from the Skidmore College with a degree in nursing and from Columbia University with certification in midwifery. Edie initially worked as a nurse midwife at the Home Birth Service of Maternity Center Association in New York City. She married James F. Wonnell in 1961. The Wonnells moved to Pennsylvania and then to Delaware where Edie and Jim raised their four children and Edie worked as a nurse midwife. She retired in 1996. Edie was a pioneer in her field. In the 1950s she founded the nurse midwifery service, Downstate Medical Center, in Brooklyn, NY for Maternity Center Association of New York. While beginning her family in the early 1960s, Edie answered the call to help establish the nurse midwifery service at Johns Hopkins Medical Center in Baltimore, MD and in Pennsylvania where she was recruited by mothers to teach childbirth education. This experience led to her being recruited by the Wilmington Medical Center to establish their ground-breaking childbirth education and family-centered maternity care services. In the 1970s Edie responded to childbearing families seeking a more natural childbirth experience by leaving the medical center to establish two of the first freestanding birth centers successfully modeled as a place for the practicing midwifery in a collaborating system of health care by Maternity Center Association of New York: first in Bryn Mawr, PA in 1978, then in Wilmington, DE in 1982. Today, both birth centers continue to operate at full capacity. In recognition of her outstanding achievements in the field of midwifery, Edie was awarded an honorary doctorate degree in 2018 from the Frontier Nursing University in Lexington, Kentucky. Edie is survived by her husband, Jim Wonnell; her children, Diane Shannon, Amy Young, Jonathan Wonnell, and Patricia Brink; their spouses Sam Dennis, Joel Young, Amy Wonnell, and Gary Brink; and her grandchildren Dean, Andrew, Kira, Alex, Niall, David, Sarah, and Zoe. She is preceded in death by her brother Malcolm Baldwin, and was followed in death a day later by her sister-in-law, Susan Baldwin. A memorial will take place in the spring in Woodbridge, CT. All are welcome to attend and celebrate Edie’s life. In lieu of flowers, please donate to American Association of Birth Centers Foundation.

Edith "Edie" Wonnell (née Baldwin) died on December 21, 2019 in Saline, MI due to complications related to dementia and congestive heart failure. She was 88. Edie was born on May 14, 1931 in New Haven, CT to Clarence F. Baldwin and Margaret... View Obituary & Service Information

The family of Edith Baldwin Wonnell created this Life Tributes page to make it easy to share your memories.

Send flowers to the Wonnell family.