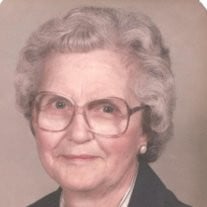 Age 95, passed away Tuesday, December 17, 2013 at the Saline Evangelical Home. She was born July 5,1918 in Lodi Twp, MI, the daughter of John and Laura (Weidmayer) Wolfe. On Nov. 28, 1940 at the home of her parents, she married Leon K. Schaible, and he preceded her in death on Jan. 30, 1977. Esther was a member of the Salem Evangelical Lutheran Church of Scio Twp, MI where she was confirmed on May 15, 1932. and a member of the Ladie’s Aid for many years. Survivors include her children John (Deneine) Schaible of Manchester, MI, and Richard (Jody) Schaible of Ann Arbor, MI. Others survivors include three grand children, Angela (Jason) Fuller, Michelle (Jason) Miner, and Jason (Summer) Schaible. Six great grandchildren and many nieces and nephews also survive. She was preceded in death in addition to her husband by a grandson Christopher Schaible, sisters Lorena (Norman) Scherdt, Virginia (Walter) Hieber, Margaret (Rudy) Feldkamp and a brother-in-law Wilbert (Selma) Schaible. Funeral services will be held on Friday, December 20, 2013 from the Salem Evangelical Lutheran Church of Scio Twp, MI at 11:00 A.M. with Rev. Douglas Hartley Officiating. In lieu of flowers memorial contributions may be made to the church or to the American Cancer Society, envelopes will be available at the church where friends may call on Thursday, December 19, 2013 from 4:00 – 8:00 P.M. and on Friday, December 20, 2013 from 10:00 A.M. until time of service at 11:00 A.M. Burial will follow in the church cemetery. To sign Esther’s guestbook, to leave a memory, or for more information or directions please visit www.rbfhsaline.com.

The family of Esther C. Schaible created this Life Tributes page to make it easy to share your memories.

Send flowers to the Schaible family.