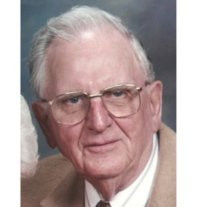 Frederick Martin Keppler, 96 passed away peacefully on Monday, April 8, 2013 with his family by his side. Frederick (Fred) was born on April 11, 1916 to William and Christine (Lutz) Keppler. On October 19, 1941 he married Lela Margaret Huss who preceded him in death on June 7, 2003 after 61 years of marriage. He was a veteran of WWII having served 4-1/2 years in the Army Infantry. Prior to military service he was employed by the Millard Press. After the service he was employed by Wanty Shoes for 17 years. Subsequently, he went to work for Washtenaw County in the Tax Description Dept. where he retired from in 1981 after 15 years. Fred was an active member of Bethlehem United Church of Christ having served as President of the Congregation, also a member of the Cemetery Board having served as its President several times. He is survived by his three children, Hugh (Victoria) Keppler, Mary (David) Normand, and Audrey Keppler, five Grandchildren, eight Great Grandchildren, one sister Fredda Clisham and several nieces and nephews. In addition to his wife, he was preceded in death by his grandson, Jeffery and two brothers, Elmer and Erwin. The family would like to thank the Brecon Angels for their loving care over the last few months. Visitation will be held on Friday, April 12, 2013 from 2:00-4:00 P.M. and 6:00-8:00 P.M. at the Robison-Bahnmiller Funeral Home in Saline, MI. Private graveside services will be held at the Bethlehem Cemetery in Ann Arbor. Memorial services will take place on Saturday, April 13, 2013 at 1:00 P.M. at the Brecon Village Auditorium in Saline, MI with visitation to begin at 12:00 P.M., with Rev. Diane White, officiating. In lieu of flowers, the family asks that you make a contribution to the charity of your choice. To sign Fred’s guestbook, to leave a memory, or for more information or directions please visit www.rbfhsaline.com.

Frederick Martin Keppler, 96 passed away peacefully on Monday, April 8, 2013 with his family by his side. Frederick (Fred) was born on April 11, 1916 to William and Christine (Lutz) Keppler. On October 19, 1941 he married Lela Margaret Huss... View Obituary & Service Information

The family of Frederick Martin Keppler created this Life Tributes page to make it easy to share your memories.

Send flowers to the Keppler family.