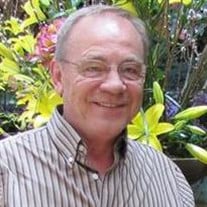 Fredrick Bruce Olsen, age 67, of Ann Arbor, Michigan, passed away on Tuesday, February 6, 2018. Fred was born on March 22, 1950, to the late Donald G. and Marie (DeBoer) Olsen. Fred’s first wife of 36 years, Evelyn Mason Olsen, preceded him in death on February 3, 2005. On April 26, 2008, he married his surviving wife, Sally (Price) Olsen. Fred is also survived by his three daughters, Rebecca (Tracey) Sheats of Bridgewater, Amanda Hoeft of Tecumseh, Cara Olsen of Tecumseh, and one step-daughter, Krista (Jay) Zielke of Nashville, Tennessee. His family also included eight grandchildren, Evan and Lucas Sheats; Natalie, Brandon, and Drew Hoeft; and Karley, Alyssa, and Ryder Zielke. He is also survived by two siblings, Douglas (Sandy) Olsen of Dundee and Susan (Doug) Weber of Ann Arbor, and many nieces and nephews. Fred treasured the time spent with his daughters and grandchildren in Michigan as well as the frequent trips to visit the daughter and grandchildren in Nashville. Fred enjoyed the out-of-doors – working in his yard, swimming in the pool with the kids, fishing, and recently, camping with Sally following the purchase of a small RV in 2016. He also enjoyed doing woodworking projects in his shop at home. Fred had worked for over 25 years at Comshare, a software development company in Ann Arbor. In 2007, he joined the University of Michigan Ross School of Business Executive Education Department to continue his career as a Graphics Artist. He had retired from there on March 31, 2017. He made many special friends made while at the University who often expressed that Fred’s kindness and compassion made a significant mark on their lives. Everyone that met Fred felt that he was a such a nice, terrific guy who always thought of others first. To honor him, his coworkers and faculty at the University of Michigan created a scholarship fund that will be awarded to a student graduating from Pioneer High School (formerly Ann Arbor High from where Fred had graduated in 1968) to continue his or her study in the highly acclaimed Washtenaw Community College Program in Graphic Arts. Because of their generosity, the scholarship fund has become an endowment that will enable it to provide a scholarship to a deserving student each year in Fred’s name for many years to come. Fred was told of this scholarship at the end of last year and was very pleased to be honored in such a way. Fred’s family would also like to give special thanks to Fred’s boss and close friend, Cheri Alexander, Executive Director of Corporate Learning at the University, for being so thoughtful to have this scholarship set up. In lieu of flowers, Fred’s family would greatly appreciate a donation being made to this scholarship fund. Donation cards and mailing envelopes will be available during visitation at the funeral home and St. Andrew Catholic Church. Friends may join the family for a time of visitation at the Robison-Bahnmiller Funeral Home in Saline on Thursday, February 8, 2018 from 5:00 P.M. to 8:00 P.M. and again at St. Andrew Catholic Church on Friday, February 9, 2018 from 10:00 A.M. until the time of Mass of the Christian Burial at 11:00 A.M. Fr. Francis Mossholder as celebrant. Burial will follow at the Oakwood Cemetery in Saline. To sign Fred’s guestbook, to leave a memory, or for more information, please visit www.rbfhsaline.com.

The family of Fredrick Bruce Olsen created this Life Tributes page to make it easy to share your memories.

Send flowers to the Olsen family.