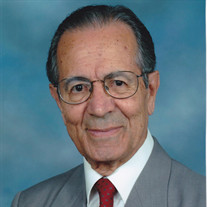 Age 91, went home to be with the Lord on Thursday, July 14, 2016 at Brecon Village in Saline, MI. He was born May 1, 1925 in Medellin, Colombia, the son of Jesus and Florentina (Burgos) Vera. On June 16, 1956, in Toledo, Ohio he married Elaine Ruth Schlatter and she preceded him in death on July 1, 1978. Gabriel married Marianne Szasz in Toledo, Ohio on May 4, 1985. She preceded him in death on October 10, 2009. Survivors include children from his first marriage: Gabriel Richard (Cathy) Vera-Burgos, Mary (George) Teeter, and David (Sherri) Vera-Burgos. Other survivors include his sisters Angela and Amparo Vera, and his 11 grandchildren, Gabriel Richard, Jr, Rebecca, Christopher, Daniel, Brian, Benjamin (Jen), Zachary, Jeremiah, Hannah Vera-Burgos, Rachel, and Ryan Teeter. Gabriel’s priorities in life were God, family, and country. He was a quiet man who was fiercely independent. He never sought personal recognition, but devoted his time in the support of his family. As a lifelong devoted Catholic, Gabriel made his faith a part of his daily life. He was a consistent participant at the local parish wherever he lived, be it in Garden City where he raised his family, or in Toledo where he and Marianne resided. His prayerful approach to everyday life was witnessed by all who knew him. In 1949, at the age of 23, he immigrated to the United States. Before even becoming a citizen, he served in the United States Army during the Korean War. He came home to study at Wayne State and joined the International Institute where he met Elaine. He spent his entire accounting career working for the University. His loving nature over the years supported his mother, sending his meager military income to Colombia, and cared for Elaine through her long battle with cancer and Marianne through her struggle with Alzheimer’s. Gabe loved music—Colombian, Classical, the Waltz, and Hymns. He played percussion in his high school marching band and continued to love watching his kids and grandkids perform in school music. A Mass of the Christian Burial will take place on Friday, July 22, 2016 at 10:30 A.M. at St. Andrew the Apostle Catholic Church in Saline, MI. A luncheon will follow the service at the church. Burial will take place at 2:30 P.M. in the Parkview Memorial Cemetery, Livonia, MI. In lieu of flowers memorial contributions in Gabriel’s name may be made to the church or designated to the Art and Music Therapy programs at Brecon Memory Support Center. Envelopes will be available at the church where friends may begin calling on Friday, July 22, 2016 from 10:00 A.M. until the time of the service. To sign Gabriel’s guestbook, to leave a memory, or for more information or directions please visit www.rbfhsaline.com.

The family of Gabriel Angel Vera-Burgos created this Life Tributes page to make it easy to share your memories.

Send flowers to the Vera-Burgos family.