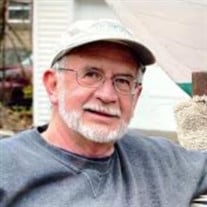 Gary Lee Brink, 74 years old of Ann Arbor, MI passed away Sunday, November 15, 2020 due to complications related to dementia. He was born August 31, 1946 to the late Jay and Albertha (Bosgraaf) Brink in Zeeland, MI. Gary grew up in Hudsonville, MI with his siblings along with many of his Aunts, Uncles, cousins and grandparents. He graduated from Unity Christian High School, briefly worked at Chris-Craft boat building company before joining the Coast Guard. He served our country in the USCG from 1966-1976. To appreciate Gary’s life, one must understand Gary’s easy going nature and his gift of conversation that allowed him to easily establish connections. His curiosity often led him to wander off. He developed this habit long before his dementia days and his family would often find him engrossed in conversations with complete strangers. Gary always managed to find some connection or common ground between the two, and ultimately, his family would have to listen to the story. Gary’s life was full of stories; most are true, some are embellished, and a few are still pending validation. Gary’s younger years were difficult. In 1956, Gary and his family survived an F5 tornado that devastated Hudsonville, MI. The family lost everything in the tornado and had to make a new beginning. As the middle child with dyslexia during a time when learning disabilities were not well known, schooling did not come easy and he quickly learned that charm, a quick wit, and some fast talking can get you some leniency. Gary, his older brother and cousins had lots of practice talking themselves out of trouble. Together, they schemed and executed cleverly planned pranks that rival anything you have seen in the movies, often their quick wit saved them from serious punishment. The unorthodox strengths that Gary developed in childhood ultimately set him up for a life embodied with a genuine compassion and humility for others and a spontaneity for life. Gary had many successful careers but never really worked a day in his life because he always found the fun in whatever he did. His careers were usually driven by a dream that he and a friend sketched out on a cocktail napkin over a drink at the bar or on his sailboat, Elysia, his haven, best friend, home, escape route or as his wife knew her, “the other woman.” Of his many “jobs”, Gary spoke the most about his true accomplishments and businesses that he created over the years; doing environmental cleanup with Land & Lakes Environmental; working with TV 7 & 4, an NBC affiliate in Traverse City and then as owner of Media Creations Television Productions, where his work contributed to Traverse City receiving the All-America City Award in 1984; operating Christina Charters which did maritime surveying, repairing, chartering and delivery of boats in addition to the Charlevoix Boat Shop; managing several stores for Boat U.S. and West Marine; opening Folgarelli & Brink’s Gourmet Deli and offshoot restaurant, Wild Hare, in Ft. Wayne, IN; and being a certified home and residential inspector for Fannie Mae and Freddie Mac. No matter what Gary was doing, he excelled in translating his skills and interests into work that adjusted with his lifestyle. He had a teacher’s heart and his many stories over the years all had a purpose - to help someone understand their path, share a life skill, or make a connection. Surviving the 1956 tornado along with his Coast Guard training seemed to condition Gary to be on alert for anyone needing a helping hand or rescue. He helped many people over his lifetime - friends and relatives that were off-course; battered women he helped shelter; numerous people he took sailing and listened to their stories in their time of need; veterans in need of remembrance; dying children making their last wish and so many more. For someone who was written off as a child due to undiscovered learning disabilities, his life was full of amazing accomplishments. But most important, was Gary’s devotion to his children, Christine and Andy. No matter the distance or the time, he always made them his top priority. As Gary’s disease progressed, and he lost his short-term memory and physical capabilities, he never complained. He said “I have no regrets; I’ve done more things in my life than any human being ought to have. I’ve had more fun, done more things than a whole bunch of people combined! I’ve made mistakes, but I have learned from them. If you don’t learn from them, then you have a problem.” Every time Gary would dock Elysia he would say “We’ve cheated death one more time” and pull out the bottle of Tuaca and pass it around. If you choose, raise a glass to Gary one last time. “Here’s to eternal life my friend, may you live on in our hearts and memories forever, Cheers!”. He is survived by his wife of 24 years, Patricia (Wonnell) Brink; children: Christine (Brink) McPhillips, Andrew Brink; grandchildren: Connor McPhillips, Casey (Matthew) Knutel; siblings: Thelma (Roger) Laninga, Ken Brink, Bob Koning, and Vern (Therese) Brink; in-laws: Jim Wonnell, Diane (Sam) Shannon, Amy (Joel) Young, Jonathan (Amy) Wonnell; as well as many nieces and nephews. Along with his parents, Gary is preceded in death by his infant son, Wesley Brink; sister Linda Koning and mother-in-law Edith (Baldwin) Wonnell. A virtual memorial service will be held on Saturday, December 5, 2020 at 1:00 PM. and can be viewed at the funeral home’s Facebook page. In lieu of memorial contributions, the family asks that you perform a random act of kindness in Gary’s name and share the experience or validate a fond memory of him with them on his Tribute page (https://www.tribute.co/gary-l-brink/).

Gary Lee Brink, 74 years old of Ann Arbor, MI passed away Sunday, November 15, 2020 due to complications related to dementia. He was born August 31, 1946 to the late Jay and Albertha (Bosgraaf) Brink in Zeeland, MI. Gary grew up in Hudsonville,... View Obituary & Service Information

The family of Gary L. Brink created this Life Tributes page to make it easy to share your memories.

Send flowers to the Brink family.