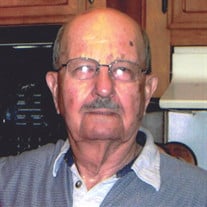 Age 91, passed away on Monday, January 11, 2016 at the Saline Evangelical Home. Gene was born in Ann Arbor on December 3, 1924 the son of Harry and Marguerite (Acton) Welter. On May 1, 1954 in Ann Arbor, MI, he married Janis L. Brown and she preceded him in death on September 27, 2009. He grew up on the family farm and later went to work for Chrysler as a Mechanic until his retirement in 1986. Gene was a member of the Elks Lodge, the Ann Arbor Moose Lodge #1253, Fraternal Order of Eagles #2154, Saline American Legion Post #322, and the Tri-County Sportsmen’s League. Survivors include his children Sandra Straub and Scott Stull, grandchildren Terry and Tony Straub, Jamie (Dave) Miles, Nicholas Hilden, and great-grandchildren Jessica, Tony, Dominic, Eli, Bellah, Leah, Lucas, and Jacob. Other survivors include his sister-in-law Brenda Brown and sister-in-law Myrna (Gary Boychuck) Brown. Gene was preceded in death by his parents, stepfather Henry Louis Stull, sister Ruth Simpson, wife Janis, and son Stephen Stull. Funeral Services will be held on Saturday, January 16, 2016 at 11:00 A.M. at the Robison-Bahnmiller Funeral Home in Saline with Rev. Judith Shipman officiating. Burial will take place in Oakwood Cemetery in Saline following the service. In lieu of flowers memorial contributions may be made to the Saline First Presbyterian Church or to The American Cancer Society. Envelopes will be available at the funeral home where friends may begin calling on Friday, January 15, 2016 from 2:00 P.M. to 8:00 P.M. and on Saturday, January 16, 2016 from 10:00 A.M. until the time of service at 11:00 A.M. To leave a memory, to sign Gene’s guestbook, or for more information or directions please visit www.rbfhsaline.com.

The family of Gene A. Stull created this Life Tributes page to make it easy to share your memories.

Send flowers to the Stull family.