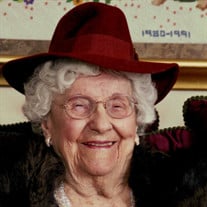 Genevieve (Gen) May (Seley) Faupel, age 102-1/2, passed away on Saturday, February 3, 2018 from natural causes at the Saline Evangelical Home of Saline Michigan with family present. Gen was born in Bad Axe, Michigan on May 13, 1915. She was the oldest of six children born to Arthur Sheridan Seley ("Art") and Agnes Caroline Holtz ("Carrie"). Gen married the love of her life (her high school sweetheart), Maurice Laverne Faupel, in 1935. Gen and Maurice relocated to Washtenaw County during World War II after Maurice took a job at the Bomber Plant at Willow Run. Maurice left the Bomber Plant to open an insurance agency, and Gen did the office-work for Maurice for decades. Gen and Maurice had a wonderful life, working together and eventually building their dream-home on Sherman Street in Ypsilanti where they raised their two children, Kirk and Myrna. Gen was widowed after 39 years of marriage. While she was happiest with Maurice, Gen had a full life after Maurice's death in 1975. Within a few months of Maurice's death, Gen took a part-time job at the then-Hudson's store at Briarwood Mall. Gen worked in many different departments at Hudson's and then at Marshall Field's, ending her career there in Gift Registry. Despite her age, Gen learned to use the computers in the store and had almost-perfect attendance as an employee. As she would often say, "You have to take the bull by the horns." In fact, Gen worked at Hudson's/Marshall Field's from the time she was 60 years old until she retired at the age of 82. During this time, Gen also traveled extensively, visiting many countries in Europe and the Middle East (including the Holy Land). She always said about travelling, "If you want things to be like home, stay at home." Gen spent many happy summers with Kirk and Marian on their boat and travelling with Marian on the "passes" she received as the mother of an airline pilot. From 1980 through 1983, Gen helped take care of her grandson, Corey, so that Marian could go to Wayne Law School in Detroit and eventually open her own law firm. Gen was also the exclusive babysitter for Myrna and Roger's children (Scott and Lisa) while they were growing up and did "dog-sitting" for family members whenever they vacationed. She pretended to like all the family pets except for "Walter," an ill-behaved cat who loved her nonetheless. Gen's granddaughter, Lisa, married a career Army officer, and Gen visited Lisa; her husband, Ron; and their son, Christopher, at almost every post where they were stationed. Lisa and Ron fondly remember Gen's going with them to Disney World and getting on the rides when she was 80 years old. Gen also spent many happy hours with her grandson Corey; Corey's wife, Tracie; and great-grandchildren Caden and Nina (who live in Chelsea) as well as her grandson, Scott Quackenbush; his wife, Patti; and Scott's three children: Brandon, Kaitlin, and Tyler, who live in the Kalamazoo area. Gen became a great-great-grandmother when Scott and Patti's son, Tyler, and his wife, Sarah, had their two children (Kingston and Fisher) and when other great-grandson, Chris, and his wife, Rachel, had one son (Dean). If there was ever a "great" grandmother, it was Gen. Words cannot describe what a wonderful, giving person Gen was to everyone (friends and family alike) and how much she will be missed by her family and many friends. Gen lived at Brecon Village in Saline for years, where she continued to play killer-bridge. She then lived with Marian and Kirk for several years before moving to the Evangelical Home. The family was comforted to hear moving stories about Gen from the many people at EVH who lovingly cared for her, including Dawn, Ashley, Mark, Staci Brown, Keesha, Tom, and Nikki, all of whom admired Gen's sassiness. The family also appreciates the wonderful medical care Gen received from the nurses at EVH, including June (who cared for her at the end), Julie and Wina. On top of that, Gen had a wonderful "roommate," Sarah, who would summon help if Gen needed it and became a friend. Gen loved to make family dinners throughout her life, including dinners at her home following University of Michigan home games. Gen's favorite dinners included scalloped potatoes and ham, Swedish meatballs, chop suey, and beef stroganoff along with her ever-present jello salads. For the past five years, Gen was a resident of the Saline Evangelical Home ("EVH"), where she was known for her sense of humor and endless "sayings." The family is ever-grateful for the care Gen received at EVH, especially the loving care she received from Dawn. Gen is survived by her son, Kirk, and daughter-in-law, Marian Faupel of Saline along with her daughter, Myrna, and son-in-law, Roger Quackenbush, of Fairfield Glade, TN. Gen is also survived by three grandchildren and their spouses (Scott and Patti Quackenbush of Mattawan; Corey and Tracie Faupel of Chelsea; and Lisa and Ron Caffee of Elizabethtown, KY); six great-grandchildren and their spouses (Brandon; Tyler and Sarah; and Katelin Quackensbush of the Kalamazoo area along with Caden and Nina Faupel of Chelsea); and three great-great-grandchildren: Kingston and Fisher Quackenbush of Kalamazoo and Dean Caffee of South Carolina. Gen was preceded in death not only by her husband, Maurice, and her parents (Carrie and Art Seley) but also by her siblings: Leonard James Seley, Willard J. Seley, Audrey Mildred Bouck, and Madalyn Joyce Krause. She is survived by her sister, Marjorie Campbell, of Bad Axe, MI. A Celebration of Life Gathering will take place on Saturday, February 17, 2018 from 2:00 P.M. to 4:00 P.M. in the Community Room at the Saline Evangelical Home in Saline, MI. The family asks that if you would like to make a contribution in Gen's name, you consider donating to the Evangelical Home-Saline and envelopes will be available at the gathering.

Genevieve (Gen) May (Seley) Faupel, age 102-1/2, passed away on Saturday, February 3, 2018 from natural causes at the Saline Evangelical Home of Saline Michigan with family present. Gen was born in Bad Axe, Michigan on May 13, 1915. She was... View Obituary & Service Information

The family of Genevieve May Faupel created this Life Tributes page to make it easy to share your memories.

Send flowers to the Faupel family.