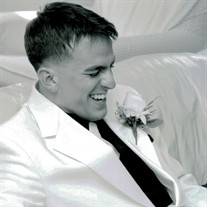 Age 28, passed away on Wednesday, April 20, 2016 in Northfield Township, MI. Geoff was born on July 7, 1987 in Ypsilanti, MI, the son of Robert Charles and Wendy Lynn (Dilloway) Bowen. On August 27, 2011 in Ann Arbor, MI, he married Lauren Kowalski, and she survives. Geoff proudly served as a Marine in the United States Military. He loved camping, fishing, hunting, and spending time at Post #46 Hunt and Fish Club. Geoff was a devote Christian who was dedicated to sharing God's word with others. He is loved by his family and took pride in what his family had become. Geoff was a father, son, brother, husband, and friend. He will be thought of daily, and missed by anyone who had the privilege of getting to know him. Geoff is survived in addition to his wife by their son Augie Bowen and their daughter Tanner Bowen. Other survivors include his mother Wendy Bowen, brothers Keith Bowen and Kenny Bowen, his sister Jennifer Smith, and many aunts, uncles, cousins, and friends. He was preceded in death by his father Robert Charles Bowen. Funeral Services will take place on Monday, April 25, 2016 at 11:00 A.M. at the Saline First United Methodist Church with Pastor Jeff Sheeks officiating. Military Honors will be held under the auspices of the Washtenaw County Veterans Honor Guard. Burial will take place in the Great Lakes National Cemetery in Holly, MI at a later date. In lieu of flowers, memorial contributions may be made to Lauren Bowen for the purposes of establishing an educational fund for their children Augie and Tanner. Envelopes will be available at the Church where friends may begin calling on Sunday, April 24, 2016 between the hours of 3:00 P.M. and 8:00 P.M. and again on Monday, April 25, 2016 from 10:00 A.M. until time of service at 11:00 A.M. To leave a memory, to sign Geoff’s guestbook, or for more information or directions please visit www.rbfhsaline.com.

The family of Geoffrey Michael Bowen created this Life Tributes page to make it easy to share your memories.

Send flowers to the Bowen family.