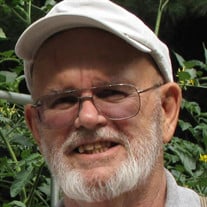 We lost George (78) on Tuesday, March 9th, 2021 to complications from pneumonia and dementia. He was born on August 13, 1942 in Traverse City, MI the son of George P. and Hazel (LaForrest) Boehm. Traverse City was not only George’s birthplace, but the place he loved and lived in almost his whole life. George and his wife, Sarah, moved to Saline, MI a year and a half ago to be closer to their kids. Traverse City Schools were a major part of George's life: as a student, an athlete, a coach, and a teacher. Living in Traverse City also allowed him to be near the cottage in Eastport and the hunting cabin in Kalkaska, where he hunted, fished, and spent as much time outdoors as he could. Their home also provided him a place to display his building skills in so many diverse ways. He truly was a jack-of-all-trades. This past year was a godsend for him, as he spent many hours with his children, particularly with his son, Jeffrey. George was preceded in death by his parents, his brother Jack, his brother-in-law Chuck, and many other close relatives. He is survived by his wife Sarah, his children Jeffrey (Caitlin), Shannon and Marena (Roy), his granddaughter Katya, and his brother Gary. He is also survived by his brothers and sisters-in-law, his nieces and nephews, and of course his dear friends, the Holdemans, the Aylings and the Salathiels. Cremation has taken place. A gathering for friends and family will take place this summer. To leave a memory you have of George, to sign his guestbook or for more information please visit www.rbfhsaline.com

We lost George (78) on Tuesday, March 9th, 2021 to complications from pneumonia and dementia. He was born on August 13, 1942 in Traverse City, MI the son of George P. and Hazel (LaForrest) Boehm. Traverse City was not only George&#8217;s birthplace,... View Obituary & Service Information

The family of George P. Boehm created this Life Tributes page to make it easy to share your memories.

Send flowers to the Boehm family.