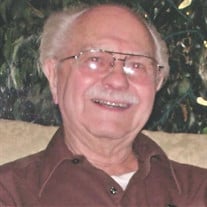 Age 92, died Wednesday, May 28, 2014 at Allegiance Hospice Home in Jackson, MI. He was born September 11, 1921 in Sharon Twp., MI, the son of Oscar S. and Matie L. (Seitz) Bahnmiller. He married Mildred L. Uhr on February 23, 1945 at Emanuel United Church of Christ in Manchester, MI and she preceded him in death on December 8, 1993, following a 10-year battle with cancer. Jerry and Mildred owned and operated the Bahnmiller Funeral Home (Robison-Bahnmiller Funeral Home) in Saline for many years. He graduated from Manchester High School and Wayne State University, Department of Mortuary Science. He was a member of the Michigan Funeral Directors Association for more than 60 years and was a member and Past-President of the local district of the Association. He was a member of St. Paul United Church of Christ in Saline and past Treasurer of the church council. For 25 years he was a member of the Saline Community Hospital Board of Directors and Past-President. He was a former member of the Board of Directors of Citizen’s Bank (Key Bank). For more than 40 years he was a member, Past-President and a Paul Harris Fellow of the Saline Rotary Club and he was also President of the United Fund. Jerry served 3 ½ years in the United States Army during World War II with the 11th Airborne and was a long time member of the Saline American Legion Post # 322. He was also a former member of the Ann Arbor Elks Lodge # 235 and a 30-year member of a Deer Camp, the Broken Horn Club of Tawas, MI. Survivors include his sister, Marjorie Hall of Laguna Beach, CA, two nieces, Mrs. Marge Ann (Chris) Bigg and Ms. Angie Fiedler, two nephews, Larry Swistak and Jack Kimbrell and their children and grand-children. He was preceded in death, in addition to his wife Mildred, by his parents, sister, Elaine Kimbrell and a loving companion of 14 years, Jo Ann Geer. Visitation will be held on Saturday, May 31, 2014 from 11:00 A.M. until the time of the Service at 1:00 P.M. at the Robison-Bahnmiller Funeral Home in Saline, with Rev. Dr. Patricia Kenney, officiating. Burial will follow at Oakwood Cemetery in Saline with Military Honors under the auspices of the Veterans Honor Guard of Washtenaw County. Memorials may be made to St. Paul United Church of Christ and to the Saline Evangelical Home and envelopes will be available at the funeral home. To sign Jerry’s guestbook, to leave a memory, or for more information or directions please visit www.rbfhsaline.com.

The family of Gerald O. "Jerry" Bahnmiller created this Life Tributes page to make it easy to share your memories.

Send flowers to the Bahnmiller family.