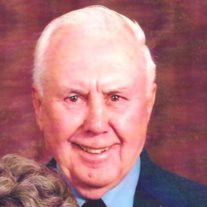 On Thursday, February 13, 2014 at age 83, Gerhard went home to be with his Lord and Savior where he heard the words, “Well done good and faithful servant”. He was born August 13, 1930 in Tariverda, Romania, the son of Reinhold and Karoline (Schmidt) Heim. On March 29, 1957 in Detroit, MI, he married Carol F. Kaeser and she survives. Gerhard was a proud member of the United States Army. He was also a member of the Plumbers Local #190 in Ann Arbor, MI, as well as a former longtime member and deacon of the Saline Baptist Church. Later he and his wife attended the Fellowship Baptist Church in Saline. In their spare time Gerhard loved to golf, especially with his wife and golf partner Carol. Survivors in addition to his wife include children: Linda (Dale) Dawson, Betty (Glenn) Hmay, Barb (Mike) Huff, and Mary Ann (Tim) King. Other survivors include grandchildren: Joshua, Jeremy (Laura), Esther and Sarah Dawson, Stephen, Tiffany, Brittany, and Heather Huff, Kyle and Ashley King, sisters Martha and Rosa, and a brother Friedrich. He was preceded in death by his parents and one sister Kathy. Funeral Services will be held on Monday, February 17, 2014 at 11:00 A.M. at the Calvary Bible Church 8318 Carpenter Road, Ypsilanti, MI, 48197, with Pastor Dale Dawson officiating. Burial will follow at 2:00 P.M. at Oakwood Cemetery in Saline, MI. Military honors will be held under the auspices of the Washtenaw County Veterans Honor Guard. Memorial contributions may be made to The Military Order of the Purple Heart or The Gideon’s International. Envelopes will be available at the Robison-Bahnmiller Funeral Home in Saline, MI, where friends may begin calling on Sunday, February 16, 2014 between the hours of 3:00 P.M. and 5:00 P.M. and also at the church on Monday, February 17, 2014 from 10:00 A.M. until the time of service at 11:00 A.M. To sign Gerhard’s guestbook, to leave a memory, or for more information or directions please visit www.rbfhsaline.com.

The family of Gerhard Heim created this Life Tributes page to make it easy to share your memories.

Send flowers to the Heim family.