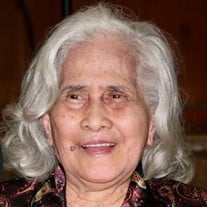 Gloria Jamias Aguilar, 91, was born on March 6, 1926 in a small town in the Philippines called Famy, Laguna. She migrated to the United States on August 30, 1997 and became a naturalized United States citizen on December 19, 2008. She was a long time resident of Southern California, until she relocated to Saline, Michigan on July 16, 2016 with her daughter and son-in-law. Growing up, Gloria experienced tropical weather in the Philippines. In Southern California, she enjoyed the sunny temperate climate. Migrating to Michigan, she truly experienced all four seasons. She was a true willing adventurer, and easily adapted and embraced all new challenges. Gloria departed from us to return home to our Lord. She left peacefully at Glacier Hills Senior Living in Ann Arbor, MI, on January 17, 2018, only a few weeks shy of her 92nd birthday. Gloria was married with five children. She was predeceased by her husband, who she was married to, for more than forty-seven years. She was also predeceased by her three sons and a daughter. She is survived by her youngest daughter, son-in-law, grandchildren, grand son-in-law and great grandchildren. Gloria’s interests included her family, going to adult day care, regularly joining church services, learning new experiences, participating in strengthening exercises, games, puzzles and interacting with other residents. Gloria’s spirit lives on with all of us. Thank you Nay (as she was fondly called). We love and miss you dearly. A Celebration of Life will be held in Ann Arbor, MI and in Los Angeles, CA, before moving her cremains to the Philippines for her final resting place, to be with her loving husband and other children. The saying goes: “life is short.” I believe it’s long enough for those who have truly lived. Gloria, my grandmother, or as we fondly call her Nay, was a woman of little words and an ocean of wisdom. Beyond her biological legacy, she leaves behind the memories and first-hand accounts of a world changed. Billions of doe-eyed youth will learn of great wars, unimaginable leaps of technology, and the historic resilience of the human spirit, but my grandma belonged to a select few who have actually seen it and an even smaller group to have not succumbed to the cynicism often bred from living through it. Nay died as she lived and as she wanted her family and the world to be: in peace. And she lived everyday of her life to 91 as we should- donning the will to see tomorrow with the eyes of a child constantly surprised at the wonder of the world around them. In her words: “Ay, nako! buhay.” “Oh my! life.” I will miss you Nay. I love you. Timi

Gloria Jamias Aguilar, 91, was born on March 6, 1926 in a small town in the Philippines called Famy, Laguna. She migrated to the United States on August 30, 1997 and became a naturalized United States citizen on December 19, 2008. She was... View Obituary & Service Information

The family of Gloria J. Aguilar created this Life Tributes page to make it easy to share your memories.

Send flowers to the Aguilar family.