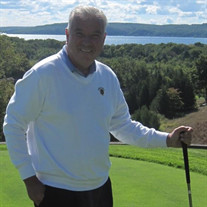 Gordon Louis Hopcian, 68, of Frankfort, Michigan, passed away peacefully on Sunday, May 9, 2021 with his wife and two daughters by his side. Gordon (more affectionately known as Gordie or Gord) was born on July 7, 1952 in Detroit, Michigan, to the late Chester Joseph Hopcian and the late Sophie Joan (Jankowski) Hopcian. On September 26, 1986, he married Carol McKee. Gordon is survived by his wife, Carol, and two daughters, Emily and Kathryn. He is also survived by his siblings Priscilla (James) Kennedy, Tom (Patty) Hopcian, Sandee Hopcian and Lorna (Paul) Cavanaugh as well as his parents-in-law Robert McKee and Janice (Kilian) McKee and siblings-in-law Bob (Susan) McKee and Lisa (Glenn) Wagner and many nieces and nephews. Gordie graduated from Lawrence Institute of Technology in 1988 with a bachelor’s degree in industrial management. From 1971 to 2005, he worked at Ford Motor Company, starting as a janitor and ultimately working as a launch manager of new products, working on vehicles such as the Ford F-150, Ford Ranger, Ford Escape, Ford Taurus and more. Following his retirement from Ford Motor Company, he worked for Automodular Corporation until 2015, when he officially retired. From 2000 to 2005, Gordie served as an elder for First Presbyterian Church of Northville, Michigan. From 2015 to 2021, he was a member of the house committee at Crystal Downs Country Club in Frankfort, Michigan. He also served as a board member with Paul Oliver Memorial Hospital and Community Cats of Benzie County. Gordie loved life and lived it to the fullest. He genuinely loved and cared for the people in his life, and he was loved by everyone who knew him. He was larger than life and often the life of the party. He loved to golf; cook and entertain family and friends; go for boat rides on Crystal Lake; watch the Detroit Red Wings and Lions with his dog, Sydney Sue; spend quality time with family and friends; and simply enjoy life. We will forever remember his smile, laugh, the twinkle in his eye and the way he would tell a story and have the eyes, ears and laughter of the entire table or room. Plans for a private (family only) memorial service in May are underway, and a celebration of life will be held around Gordie’s birthday in July. Gordie requested donations be made in his memory and honor to the Epilepsy Foundation of Michigan or Paul Oliver Memorial Hospital (in Frankfort, Michigan).

Gordon Louis Hopcian, 68, of Frankfort, Michigan, passed away peacefully on Sunday, May 9, 2021 with his wife and two daughters by his side. Gordon (more affectionately known as Gordie or Gord) was born on July 7, 1952 in Detroit, Michigan,... View Obituary & Service Information

The family of Gordon Louis Hopcian created this Life Tributes page to make it easy to share your memories.

Send flowers to the Hopcian family.