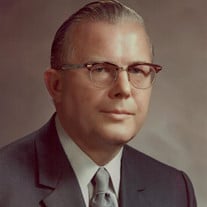 Harold J. Peplau 94, passed away peacefully on Tuesday, March 27, 2018. Born on February 20, 1924, he is survived by his wife of 71 years Stella (Kay) Peplau, his two daughters Karen Cook and Sharon (Bruce) Robinson, and his two sisters Evelyn Candianides and Dorothy Kasmar. Harold was born in Detroit and moved to Saline after high school and worked on his farm for several years when he met and married his wife Stella. While he worked at many different occupations throughout his life, Harold always considered himself first and foremost a farmer. After working several years in the Willow Run Bomber plant and at Ford Motor Company as a machinist, he partnered with Vaughn Smith and started Smith’s Floor Coverings, Inc. and with Jerry Mrozinski to open Ann Arbor Carpets. He worked for 39 years until he retired in 1990. During this same period, Harold was one of the founding Board of Director members for Huron Valley National Bank in Ann Arbor. He served on the board from 1963 through 1994 which included several years as the Chairman of the Board. After he retired, Harold worked to become a master gardener and volunteered extensively at Matthaei Botanical Gardens. He worked in the gardens and helped with their annual fund raising flower show. He also lived for his farm, starting a small apple orchard and a formal rose garden, mowing lawns, and gardening. Even at 93, Harold was still mowing 5 acres of lawn on a large commercial lawn mower and tending a large vegetable garden. It was the place he was the happiest. Harold’s philanthropic works included extensive contributions to the U of M Cardiovascular Center, helping to fund several heart treatment studies in the early 1990’s. He also worked closely with other donors in 2009 to help fund a permanent facility for Therapeutic Riding Inc. on East Morgan Road in Ann Arbor that was named in his and Stella’s honor. This list also includes help to provide ongoing financial support to Food Gatherers of Ann Arbor, Gleaners Food Bank of Detroit, and Forgotten Harvest of Oak Park Michigan through donation matching grants that have helped fund over 20 million meals. Finally, one of Harold’s greatest honors was to be nominated by Michigan Abilities Centers Equine Assisted Therapy for the PATH International 2017 National Senior Rider of the Year. At the end of February this year, Harold rode with a little girl that was four years old, so there was 90 years difference in their ages. Riding at Michigan Abilities was the highlight of his 94th birthday and something that he was determined to complete no matter what. Funeral services will be held on Tuesday, April 3, 2018 at 11:00 A.M. at the Robison-Bahnmiller Funeral Home in Saline, MI with Chaplin David Goldsmith officiating. Burial will follow the service in Arborcrest Memorial Park in Ann Arbor. Friends are invited to celebrate Harold’s life with his family on Monday, April 2, 2018 from 3:00 P.M. to 8:00 P.M. at the Funeral Home and again on Tuesday, from 10:00 A.M. until the time of service at 11:00 A.M. In recognition of Harold’s continuing philanthropy, the family has requested that instead of sending flowers, to please consider making a charitable contribution to either Food Gatherers of Ann Arbor, Gleaners Food Bank of Detroit, or Forgotten Harvest of Oak Park Michigan. To avoid the inevitable question of which organization the family would prefer most, we can only say that they all do incredible work, and all three organizations deserve support. Envelopes will be available at the funeral home. To sign Harold’s guestbook, to leave a memory, or for more information or directions please visit www.rbfhsaline.com.

The family of Harold Julius Peplau created this Life Tributes page to make it easy to share your memories.

Send flowers to the Peplau family.