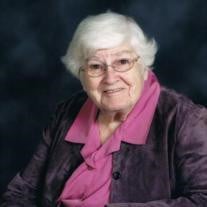 Starling, Helen Kathleen Adams Saline, MI Age 95, passed away on Friday, January 11, 2013 at the Saline Evangelical Home. She was born in Toronto, Ontario, Canada on October 5, 1917 to William J. Adams and Clare Esson Adams. She was the oldest of three children. In 1927 the family moved to Dundee, Michigan where her father assumed editorship of the Dundee Reporter. She graduated from Dundee High School in 1935 and assisted her mother with running the newspaper until 1937. On July 23, 1937 Helen was united in marriage to Robert Lynn Starling. In 1948 the family moved from Dundee to Saline. All five of their children graduated from Saline Area Schools. Helen was a Past Matron and Life Member of Saline Chapter #311 of the Order of the Eastern Star. She was initiated into the Order in 1936, was a member for 77 years, served as secretary from 1981-2003, and was a Past President of the Washtenaw County Association of O.E.S. Helen was an active member of St. Paul’s United Church of Christ and served on many committees. She was a Past President of the Saline Woman’s Club, a Life Member of the American Legion Auxiliary #322, and was president of the Washtenaw County Chapter of Cystic Fibrosis for many years. Helen faithfully donated blood to the American Red Cross and received her 10 gallon pin in 2001. From 1955 – 1965, Helen was the first crossing guard for Saline Area Schools. Many Saline residents have fond memories of Mrs. Starling making sure they made it to school and back home safely. After 15 years of employment, Helen retired from Fischer’s Hardware in Ann Arbor in 1982. She is survived by four of her five children: Sharon Heft of Saline, Robert “Bob” Starling Jr. (Katrene) of Tecumseh, John “Jack” Starling (Deborah) of Midland, and Nancy Starling Ross (Wayne) of Mosca, CO. Other survivors include daughter-in-law, Susan Starling of Tipton, 10 grandchildren, 13 great grandchildren, sister Betty Adams Martin of Arvada, CO, sister-in-law Louise Adams of Boulder, CO and many beloved nieces and nephews. She was preceded in death by her husband, Robert, son, William, parents William and Clare Adams, brother, John M. Adams, son-in-law, Robert Heft, and two grandsons, Timothy and Mark Heft. Visitation will be on Friday, January 18, 2013 from 4:00-7:00 P.M. at the Robison-Bahnmiller Funeral Home in Saline with an Order of the Eastern Star Service at 7:00 P.M. under the auspices of Saline Chapter #311 and on Saturday, January 19, 2013 from 10:00 A.M. until the time of the service at 11:00 A.M. at St. Paul United Church of Christ in Saline with Rev. Dr. Patricia Kenney, officiating. Graveside services will be private. In lieu of flowers, memorials may be sent to Cystic Fibrosis Foundation, 2265 Livernois Road, Troy, MI 48083 (www.cff.org) or Saline Chapter OES #311, 1282 Judd Road, Saline, MI 48176. Envelopes will be available at the funeral home and at the church. To leave a memory, for more information or for directions please visit www.rbfhsaline.com.

Starling, Helen Kathleen Adams Saline, MI Age 95, passed away on Friday, January 11, 2013 at the Saline Evangelical Home. She was born in Toronto, Ontario, Canada on October 5, 1917 to William J. Adams and Clare Esson Adams. She was the oldest... View Obituary & Service Information

The family of Helen Kathleen Adams Starling created this Life Tributes page to make it easy to share your memories.

Send flowers to the Starling family.