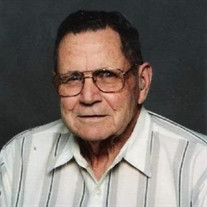 Largin, Henry "Hank" E, 89, passed away on September 13, 2016 in Zephyrhills, Florida. Hank was born September 6, 1927 to Effie & Thurman in Peterson, Alabama. As a child Hank worked the Reach family farm in Vance, Alabama. Hank enlisted in the Army at 19 and was stationed in Germany several years. It was here that he met Anna Janik the mother of his first born, Judy. After an honorable discharge from service he returned to Vance, Alabama and became an insurance salesman. That was where he met Verne Smith who later became his wife. Hank & Verne moved to Ypsilanti, Michigan in the early 1950's. It was here that they raised 2 boys, Henry Jr and Larry. Hank worked for many years at Sears Roebuck in Ann Arbor as a salesman, holding this position until retirement. While working at Sears, Hank bought a farm in Saline. With working full-time and farming he found time to deer hunt, which was one of his favorite past times. After retirement Hank & Verne moved to their northern Michigan home in Morley. It was here that Hank enjoyed gardening, hunting, and puttering in the barn and entertaining many friends and family. Later in life, Hank was lucky enough to find love again in Linda St. Onge. They spent their summers in Michigan and winters in Florida for many years. In 2013 they sold the Morley home and moved to Zephyrhills, Florida. Hank was proceeded in death by his wife Frances "Verne", son Henry Jr, son Larry and brother Frank. He is survived by his partner Linda St. Onge of Zephyrhills, brother Jerry (Marilyn) of Saline Michigan, daughter Judy of Germany, daughters in-law, Becky & Karen, grandchildren Melisa (Peter) Ellis of Jackson, New Jersey, Jodi of Ypsilanti, Christian (Shirley) Gallrapp of Germany, Kari (Brad) French of Grand Rapids, Michigan, Catherin Gallrapp of Germany, Kelly of Saline. Hank also has three great grandchildren Dylan, Charlotte and Walter and many nieces, nephews and cousins. A Masonic ceremony will be held graveside at Lodi Cemetery, Saline, MI on Saturday, October 1st at 11:00am followed by a luncheon at St. Paul's Church of Christ 122 West Michigan Ave Saline. Those planning an expression of sympathy may consider a contribution to The at donatenow.heart.org. - See more at: http://obits.mlive.com/obituaries/annarbor/obituary.aspx?n=henry-e-largin-hank&pid=181506359#sthash.7k4prS9j.dpuf

The family of Henry E. Largin created this Life Tributes page to make it easy to share your memories.

Send flowers to the Largin family.