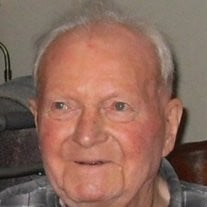 Age 87, passed away on Monday, December 23, 2013 at Premier Senior Living Center in Ann Arbor. He was born May 21, 1926 in Saline, MI, the son of Herman John, Sr and Amanda (Hertler) Kohler. Dusty received his diploma from the Benton School in Saline in 1941. The nickname, Dusty, stuck with him while working at the Bridgewater Mill. He was drafted into the United States Army at the age of 18 and served his country for 2 years traveling from Chicago to California and many states in between. He worked at Central Specialty in Ypsilanti; Motor Wheel in Ypsilanti, Washtenaw Asphalt in Ann Arbor and the Saline Ford Motor Company where he retired after 30 years. Dusty was a member of the St. James United Church of Christ of Saline Twp. He was very proud of acquiring his pilot's license from the Ann Arbor Airport. He enjoyed traveling to Canada, fishing, deer hunting, playing Euchre, listening to country music, and working in his yard. He especially enjoyed spending time with his daughters and their husbands. Survivors include his first wife Esther Mae Buss (Carrillo) and their 2 daughters: Gail Elaine (Phelix) Smiatowicz of Milan and Cindy Lee (Jim) Noble of Azalia, Granddaughters, Lacey (Matthew) Miron of Fitchburg, WI, Ashley (Dan) Bellenbaum of Fitchburg, WI, great grandson, Nathaniel Carter Miron, brother, Willard Kohler of Saline, sisters, Florence Everly of Westland, MI and Wilma Bailey of Tucson, Arizona. He was preceded in death by his daughter, Carol Lynn Lynch in 1985, his second wife, Norinne (Phelps) Kohler and sisters, Mildred Klager, Dorothy Girbach and Hermina Feldkamp. The family would like to thank Meals on Wheels of Ypsilanti, the staff of Arbor Hospice and Heartland Hospice of Ann Arbor and a special thank you to Premier Senior Living in Ann Arbor where he was for the last 4 months. Dusty's daughters would also like to thank family members and friends for their visits, phone calls and prayers during his illness. Visitation will be on Friday, January 3, 2014 from 11:00 A.M. until the time of the service at 1:00 P.M. at the Robison-Bahnmiller Funeral Home in Saline, with Rev. Wallace Tatara, officiating. Burial will follow at St. James United Church of Christ Cemetery in Saline Twp., MI with Military Honors conducted under the auspices of the Veterans Honor Guard of Washtenaw County. To sign Dusty’s guestbook, to leave a memory, or for more information or directions please visit www.rbfhsaline.com.

Age 87, passed away on Monday, December 23, 2013 at Premier Senior Living Center in Ann Arbor. He was born May 21, 1926 in Saline, MI, the son of Herman John, Sr and Amanda (Hertler) Kohler. Dusty received his diploma from the Benton School... View Obituary & Service Information

The family of Herman J. Kohler Jr. created this Life Tributes page to make it easy to share your memories.

Send flowers to the Kohler family.