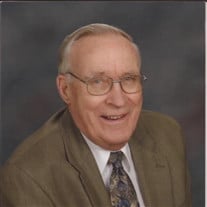 Howard M. Hill was born in Embarrass, MN on March 13, 1926. Later his family moved to Norway, MI where he graduated from Norway High School in 1944. He enlisted in the Navy after graduation and served in the Pacific during WW2. He was a long time member of the American Legion post #322 in Saline, MI. After the war, Howard attended Cleary College, where he met his future wife, Catherine. They celebrated 60 years of marriage before her passing in 2008. He earned an Associate’s Degree there and then transferred to Eastern Michigan University where he earned a Bachelor’s Degree in Education. He later earned his Master’s Degree in School Administration from the University of Michigan. Mr. Hill joined the Saline High School staff in 1951 as a Business Education teacher. Over the next few years he also took on duties as the Varsity Basketball and Baseball coach. He was the class advisor for the class of 1954. By 1959, Howard had taken on the role of Assistant Principal and Athletic Director in addition to his teaching responsibilities. In the early 1960s he was promoted to High School Principal, a position he held for three years before once again being promoted, this time to Assistant Superintendent for Business, Finance, and Transportation. He held this position until his retirement in 1988. Howard, always a behind the scenes guy, could be found in the press box during football and basketball games, and taking care of the little details at graduation ceremonies over the years. He was also known for many years as “the guy in charge of the busses.” Every afternoon you could find Howard outside the high school making sure all the kids got on the right busses, and in bad weather, checking the roads to help determine if school needed to be cancelled. In 2016 he was installed into the Foundation for Saline Area Schools Hall of Fame. Howard joins his wife Catherine and son James in heaven as well as his parents Toivo and Mamie and brother Donald. He will be missed by his daughter Christine (Paul Michaud) and grandson Aaron (Kimberly Mertz) Pohl. Howard passed away during his much loved winter trip to Florida. Friends may join the family for a time of visitation on Friday, April 1, 2022 from 4:00 P.M. to 7:00 P.M. at the Robison-Bahnmiller Funeral Home in Saline. A graveside committal service will be held on Saturday, April 2, 2022 at 11:00 A.M. at Oakwood Cemetery in Saline, with Pastor William Natsis officiating. In lieu of flowers, memorial contributions in Howard’s name may be made to the Foundation for Saline Area Schools, P.O. Box 5, Saline, MI 48176 or online at https://supportfsas.org/donate/direct-giving/ or to Trinity Evangelical Lutheran Church in Saline, 195 E. Michigan Ave., Saline, MI 48176. Envelopes will be available at the funeral home. To leave a memory you have of Howard, to sign his guestbook or for more information, please visit www.rbfhsaline.com

Howard M. Hill was born in Embarrass, MN on March 13, 1926. Later his family moved to Norway, MI where he graduated from Norway High School in 1944. He enlisted in the Navy after graduation and served in the Pacific during WW2. He was a long... View Obituary & Service Information

The family of Howard M. Hill created this Life Tributes page to make it easy to share your memories.

Send flowers to the Hill family.