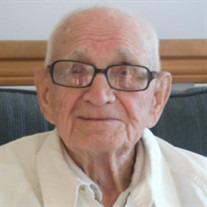 Age 97, of Saline, MI, passed away peacefully at home on Monday, August 7, 2017. He was born in Snowden Township, PA, on February 26, 1920 to parents Louis and Agnes (Uzmack) Krzisnik. He married Margaret Kovacich in September of 1949. Margaret passed July 1, 1969. Jacob remarried in 1978 to Genevieve Gliwa Sage, who passed in 2008. Jacob is survived by his two children, Gary (Diane) Krizisnik, and Karen (Jordano) Apolloni, grandchildren Caitlin Krzisnik, Trey Krzisnik, and Laura Apolloni, and great-grandson Jaden Kearney, as well as a large extended family. Jacob was preceded in death by his two brothers, Louis Jr. and Robert Kritz. Jacob enjoyed reading, gardening, and carpentry, and was a devoted fan of the Detroit Tigers and Detroit Lions. A veteran of the United States Coast Guard from 1940 to 1946, Jacob traveled the world during World War II before returning to Detroit where he worked as a building inspector for the city for 31 years. After retiring, he then worked for the Detroit Board of Education as an architectural engineer for several years and enjoyed flipping houses for the next 20 years. Funeral Services will be held on Wednesday, August 16, 2017 at 11:00 A.M. at the Robison-Bahnmiller Funeral Home in Saline, with Pastor Drexel Morton officiating. Burial will take place in the Grand Lawn Cemetery in Detroit, MI, following a luncheon. In lieu of flowers, memorial donations in his name may be made to a charity of one’s choice. Envelopes will be available at the funeral home where friends may join the family for a time of visitation from 10:00 A.M. until the time of service at 11:00 A.M. To leave a memory, to sign Jacob’s guestbook, or for more information or directions please visit www.rbfhsaline.com.

Age 97, of Saline, MI, passed away peacefully at home on Monday, August 7, 2017. He was born in Snowden Township, PA, on February 26, 1920 to parents Louis and Agnes (Uzmack) Krzisnik. He married Margaret Kovacich in September of 1949. Margaret... View Obituary & Service Information

The family of Jacob Krzisnik created this Life Tributes page to make it easy to share your memories.

Age 97, of Saline, MI, passed away peacefully at home on Monday,...

Send flowers to the Krzisnik family.