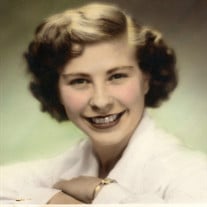 Age 85, passed away on Tuesday, January 24, 2016 at the Saline Evangelical Home following a long struggle with Alzheimer’s Disease. Jackie was born May 24, 1931 in Detroit, MI, the daughter of Arthur Ivan and Edwina Louise (King) Bergey. On June 4, 1960, she married LeRoy Ernest Ward who preceded her in death on May 4, 1992. She graduated from Ferndale Lincoln High School Class of 1949, and the University of Michigan in 1953 with a B.A in Fine Arts. Growing up, Jackie was part of a large extended family of aunts, uncles, and cousins, spending several summers with her aunt and uncle in Colorado riding horses and exploring local Native American sites, a love she later expressed in her artwork. A life-long love of the arts led her through a diverse creative career, beginning with a job in Detroit as a commercial artist creating advertising posters for the automotive industry. Jackie took great delight in creating numerous oil paintings of landscapes and still-lifes, as well as macrame wall hangings that incorporated natural elements such as drift wood, stones, and sea shells. Many years were spent exhibiting and selling her work at local art fairs throughout the 1970s. Later in life, Jackie took up drawing with colored pencils, being chosen to exhibit one of her pieces in the 10th Annual Colored Pencil Society of America International Exhibition in Texas in 2002. Many of her works found their way into the homes of friends and family over the years. She was a long-time member of the Royal Oak First Presbyterian Church where she sang in the choir for nearly 40 years. Survivors include her son, Eric Alan (Barbara) Ward, son Scott LeRoy (Kathleen Folger) Ward both of Ann Arbor, MI, grandchildren Matthew Harrison Ward and Ethan Daniel Ward, brother Arthur Laurence Bergey of West Covina, CA, and several nieces and nephews. Cremation has taken place and a graveside service at Acacia Park Cemetery in Southfield, MI will be scheduled at a later date. In lieu of flowers memorial contributions may be made to the Alzheimer’s Association (alz.org).

Age 85, passed away on Tuesday, January 24, 2016 at the Saline Evangelical Home following a long struggle with Alzheimer&#8217;s Disease. Jackie was born May 24, 1931 in Detroit, MI, the daughter of Arthur Ivan and Edwina Louise (King) Bergey.... View Obituary & Service Information

The family of Jacqueline Florence Ward created this Life Tributes page to make it easy to share your memories.

Send flowers to the Ward family.